Every designer has at some point found themselves nudging elements around on screen for an hour, only to find themselves right back where they started.

It can be a painful part of the design process.

The generic advice is to step away from your screen. Grab a coffee. And come back with fresh eyes. Which usually works just fine. But instead of this usual routine, I made a game.

Caveat – You need a design buddy to play along. I understand that this is a luxury and not always an option.

The rules are simple. One designer starts, or serves, and spends 10 minutes working on a design. After 10 minutes, no matter where they’ve got to, they fire the file over to the other designer, who spends another 10 minutes playing around with the design. That designer then sends it back and you repeat this process until you’re in a happy place with a design that can do a spin in front of a mirror and say to itself “Hey, my white space is balanced and my type hierarchy looks grand!” That’s it. That’s design ping pong.

It started off as a bit of fun, a mid-week experiment to break the routine. But it turned out pretty good. It worked. In fact, it worked really well.

10 minutes is nothing. We were working as fast as we could, throwing ideas across the canvas, duplicating the layout and playing around with version 2 and 3 before sending it back. The precious pixel nudging flew out the window.

In my 10 minutes off I had time to catch up on Slack, reply to emails, chase the office dog and glance at blogs. Then I’d get a little notification – ‘your round’ – with the file attached and away I went. 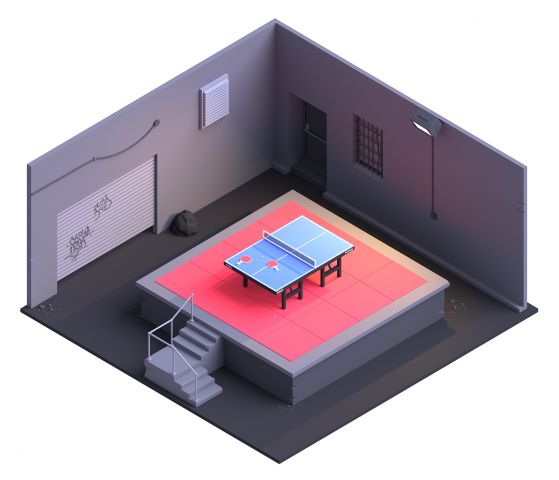 Above: Back Street Pong, my homage to Timothy J. Reynolds. He’s a rad dude, check him out.

The process was crazy productive. We put together a whole bunch of layouts in two hours, bouncing off each other and building on each others ideas as we progressed.

Sometimes I’d get a message from my design buddy (Rikke, you should check out her recent thoughts on building a happy remote team) explaining she'd run out of time – but I could immediately see what she was trying to do, and it wasn’t long before it was tidied up and I could bounce off her idea.

The short design sprints work well to shake off the tendency to be precious over pixels, hitting a strict 10 minute deadline ramps up your production speed (much like hyper Pomodoro sessions), you can use your break time to chase sausage dogs, and you get to work super close with another designer without staring over someones shoulder. You could even play remotely. And it’s fun.

Donald A. Norman, a dude much smarter than me says: “Design — and for that matter, most problem solving — requires creative thinking followed by a considerable period of concentrated, focussed effort. In the first case, creativity, it is good for the designer to be relaxed, in a good mood. Thus, in brainstorming sessions, it is common to warm up by telling jokes and playing games. Good brain storming and unusual, creative thinking require the relaxed state induced by positive affect.” (Norman, Emotional Design, 2004, p. 26). Well put Don.

There is definitely something to be said for messing around.

I enjoy breaking routine. I’ve always felt most creative when I’ve been ‘messing about’ or breaking (harmless) rules. There’s a feeling you get when, to put it in kiddy terms, you’re acting naughty. It’s as though your brain is registering that you’re not usually allowed to do whatever it is you’re doing, and it’s starting to think outside of the socially accepted boundaries it usually travels within, it starts to conjure up a whole bunch of other weird things you can do too. It’s a great creative mindset to find yourself in. It’s exciting. It unlocks doors and warms the creative spirit.

So to sum up, after that last hippy paragraph – I’d highly recommend playing a game of design ping pong next time you have the luxury of a designer buddy to work with. Or just mess around and break your day to day process, if not just to have a bit of fun.

Life is short. Enjoy yourself.

And remember to stretch after.