Out of the Shadows – My Life With Depression

Last month I gave a highly personal talk at work, sharing my experience of living with depression for over thirty years. That’s all of my adult life (and of course all of my professional life) and a good portion of my teenage years too.

Having thought about it, I’ve decided that I want to share the talk more widely.

The reason I want to do that is that my story is different from a lot of those I read and hear. I’ve read quite a few books and blogposts about people who were happy and effective in their life and then experienced a traumatic event or resilience failure that caused them to begin suffering from a mental illness. Although these experiences are deeply troubling for all concerned, I’ve noticed that people who find themselves in this type of situation are able to use the effectiveness skills that they’ve built while healthy to help themselves to recover.

I don’t in any way mean to call those experiences into question – indeed in the talk I spoke about how important it is to acknowledge the reality of people’s experience – but I think it’s a different experience if you have never built the effectiveness skills in the first place or known adult life with good mental health. That’s the story I tell in my talk.

The response to the talk was completely overwhelming. So many people shared their own experiences of depression or anxiety with me afterwards. I was prepared for some reaction, and I’m vain enough that if there hadn’t been one I would have been very disappointed, but I was not ready for the sheer number of people who contacted me.

Intellectually, I know that a huge number of people struggle with mental illness, but it’s quite another thing to come face to face with fellow suffers telling you that they’d been moved to consider their struggles anew as a result of something I’d said. I found the experience deeply, deeply moving.

I’ve given many talks before, and the experience has always been the same – a germ of an idea forms, I ruminate on it for ages and finally I set myself a deadline by publicly committing to speak. Yes, I’m a procrastinator, and a hard deadline is essential to give me the motivation to do the real work of pulling something meaningful together out of what are normally quite rambling and somewhat disconnected thoughts.

I did the same thing for this one. One day I just decided that I was going to commit to doing the talk and I set a date three weeks in the future.

Something remarkable and unexpected happened: my memory just unloaded itself. For three weeks, I thought very deeply about what had happened to me, in a way that I had never done before. I came to understand my experience at a much deeper level, and I made connections that I’d never made before. The talk I gave was very different from the one I had expected to give just three weeks earlier. 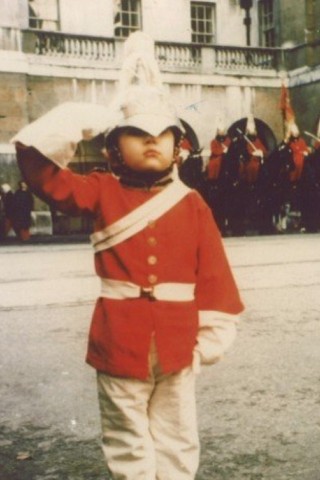 I think this illustrates an important point about mental illness: sharing in a safe environment can help tremendously. It certainly helped me, and I thank Mills & Sinx, the founders of ustwo, and all of my colleagues for creating a workplace where I feel completely safe to share something like this. Not everyone is as lucky.

With every other talk I’ve done I’ve felt that I’ve finally got the subject out of my head and have felt like I have no more to say on it. Quite the opposite happened this time. As soon as I’d finished speaking, I was overwhelmed with another wave of insight and memory. Events that I’d completely forgotten (maybe deliberately?) came flooding back, and many things started to make sense that never had before.

A lot of people have told me that they thought I was brave to share my experiences in the way I did. Honestly, that’s not at all true. Bravery is being scared and acting anyway. I was never apprehensive, and I was completely comfortable with what I did share. I knew that I would find it difficult to say a couple of things without breaking down, and that was definitely true, including in a couple of unexpected places, but that’s nothing to be worried about.

In fact, I now realise that I really only scratched the surface of what I want to say about this subject. There is so much more that I would be prepared to share – some of it much darker and more disturbing than anything that made it into the talk. I see it as the first draft of a much deeper and tighter talk.

I’d be interested in hearing from anyone who would like me to give an updated version of the talk at an event or workplace.

The talk is by no means perfect. I misspoke several times. For example what I said about placebos is not exactly what I meant and that will probably annoy some people, and I was far too dismissive about grief as well. Also, music geeks will notice that I was wrong about Beethoven op 109 – the phrases are of 8 bars, not 16.

The whole thing could have been tighter. I’ve watched it back a couple of times in order to try to understand how I could make it better. What’s great is that I’m now at the point in my life where I can do that, see that it can be improved, and feel like that’s a good outcome rather than evidence that I’m no good at giving talks.

The video itself is quite ropey, as it was originally intended only for streaming within ustwo. Where I used white text out of a black background, for example, the camera can’t see the text, and you can’t really see most of the photos. There’s almost nothing there that I don’t read out or say anyway, but it does look like I’ve just got a blank screen up.

The talk was intended for an internal audience who already know who I am and what I do. For those who don’t, I’m Technical Director at ustwo London. I’m part of a five-person team that runs the studio, so I’m responsible for the livelihoods of around 100 people, and I directly manage a team of 30. I think it’s important that anyone can share their experience with mental health, and I hope that senior people doing so sets an example that others can follow.