Being Inclusive Doesn't Need to be Complex

As designers, we strive to create products that improve people’s lives and we more often than not look for tech solutions to problems. For example, interesting things are beginning to happen on the home automation front, with Apple, Google and Samsung rolling out plans for smart homes and kitchens this year. The prospect of having a digitally-connected home ecosystem is fast becoming a reality – examples include Apple’s Homekit framework, the Google Works with Nest programme, and Samsung’s Smart Home initiative. But what happens, though, when difficult, emotive problems call for simple non-tech solutions? 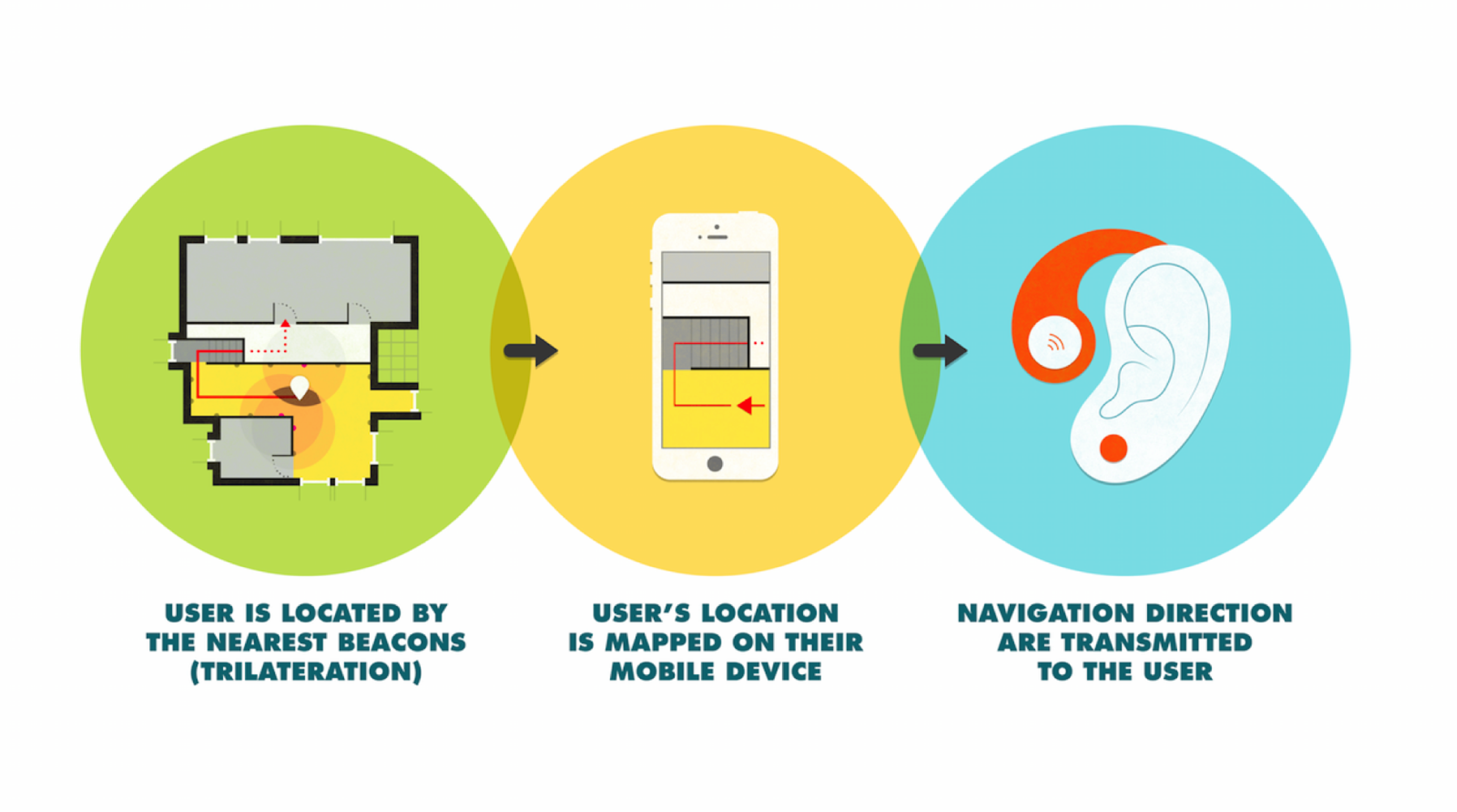 Seeing potential to build on our experience through Wayfindr (a collaboration with RLSB aimed at increasing independence on public transport for the vision impaired), covered here in Wired, we felt that new tech developments could be used to bring similar benefits at home.

Problems in the kitchen

The kitchen presents a number of problems for vision impaired people, from over-pouring liquids, walking into open kitchen drawers and cabinets, difficulty identifying ingredients and packages, checking expiry dates, to operating the microwave and cooker. 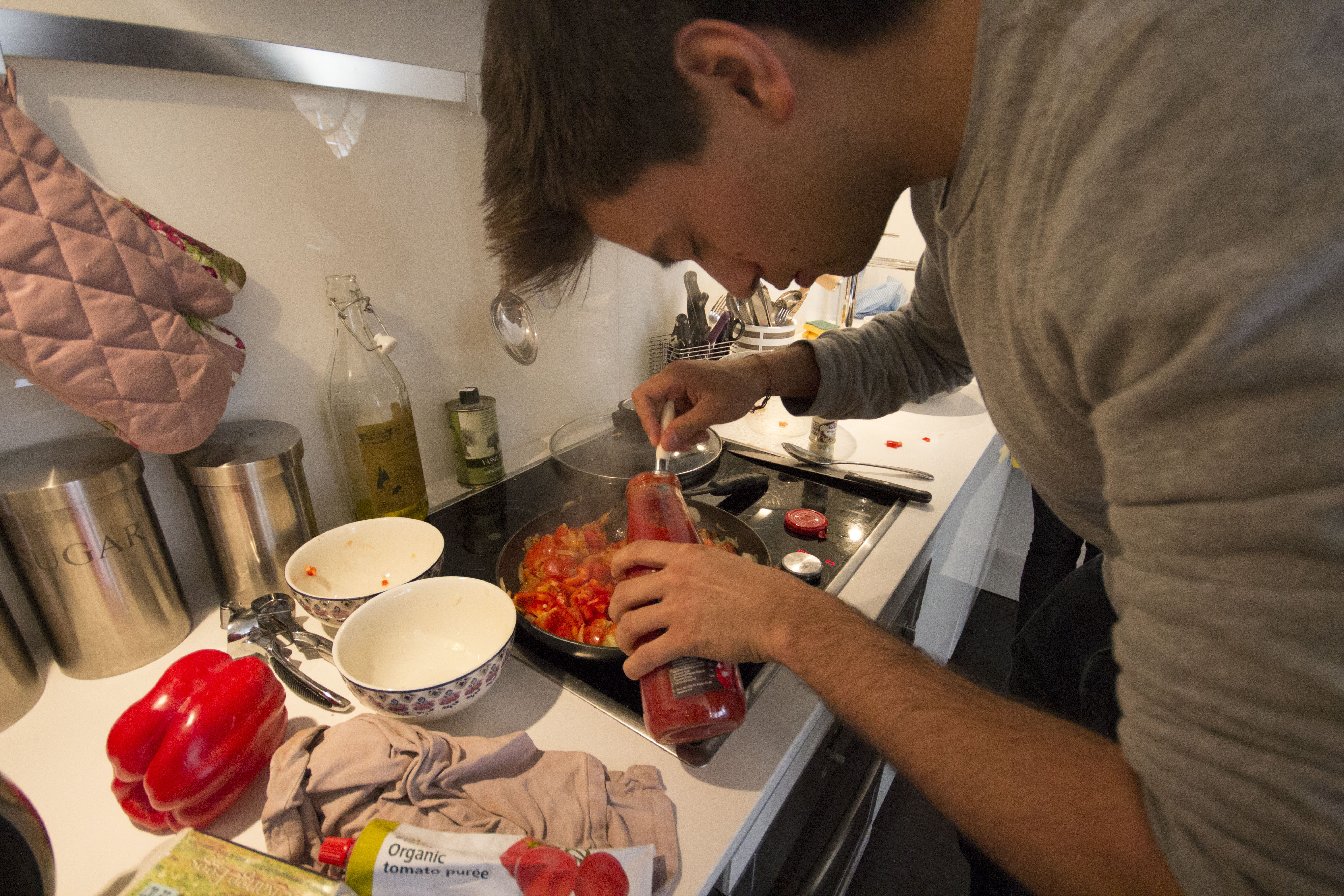 For vision impaired people these difficulties in the kitchen can lead to reduced confidence and independence, which in turn may mean they're more likely to rely on processed food and less likely to eat healthily.

We initially looked at the current assistive tools available and found numerous products and gadgets including organisational aids like digital labels using voice recording, kitchen appliances such as digital weighing scales and talking liquid level indicators. Despite these solutions though, our research revealed that the majority tended not to use assistive technology in the kitchen, mainly because they were expensive and difficult to use. It became clear that tech-driven solutions were not necessarily the answer.

The RLSB introduced us to Courtney and Michael, who shared their insights and gave us a more multi-layered understanding of their own personal strategies in the kitchen and how they complete tasks safely. Michael explained the heavy cognitive load a vision impaired person is almost always dealing with in this environment, “As a sighted person, you don’t have to remember where everything is. Being blind means having to remember everything from where you put something down weeks or mere seconds ago, to which drawers and cupboard doors you’ve left open and what you were just holding, etc.” 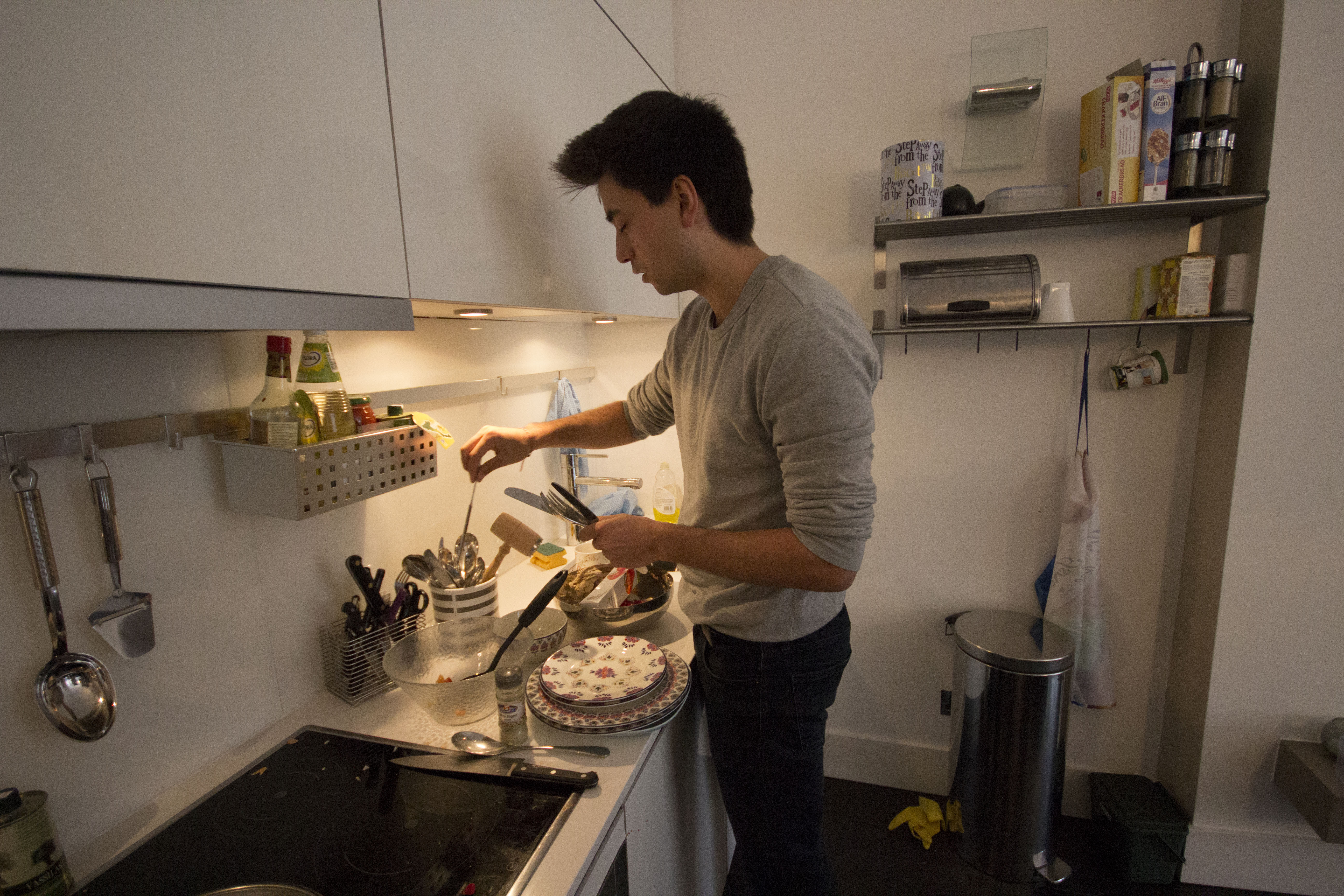 This process obviously becomes more complex when living with other people. Courtney added, “Something that becomes a problem for me is when my siblings put empty cans back in the cupboards, because I can’t tell as quickly if they’re empty or not". Another issue she highlighted concerned her family forgetting to close the kitchen cupboard doors, and them becoming a potential hazard.

Generally speaking though, both Courtney and Michael were comfortable in their own surroundings, having established organisational rules about where things belong in a defined space, such as alphabetising the spice rack or structuring fridge contents. “It’s all about being systematic,” explained Michael, “I always have uncooked ingredients on the left and prepared ingredients on the right, or angle the handle of a pan at 7 o’clock.”

Both stated that having people around helped their confidence specifically when using the cooker and oven. Courtney said that she isn’t at all afraid of working with hot water, but is highly aware of the fire risk when using the cooker. But being independent and not relying on other people to help them is something they both wanted. Michael said, "what you lose straight away when you lose your eyesight is your independence and privacy."

We decided to look into an analogue system to help with using the cooker – a major barrier to full independence in the kitchen. We used tactile, raised stickers of different sizes (similar to Bumpons) to mark out the different buttons – the main principle being if a vision impaired person is able to find and identify the basic buttons and functions, and understand how they control the cooker, they will be able to learn to use it safely and efficiently over time. Using gem stickers bought from a stationery store, we tested out a system of markers on a microwave and a cooker hob. 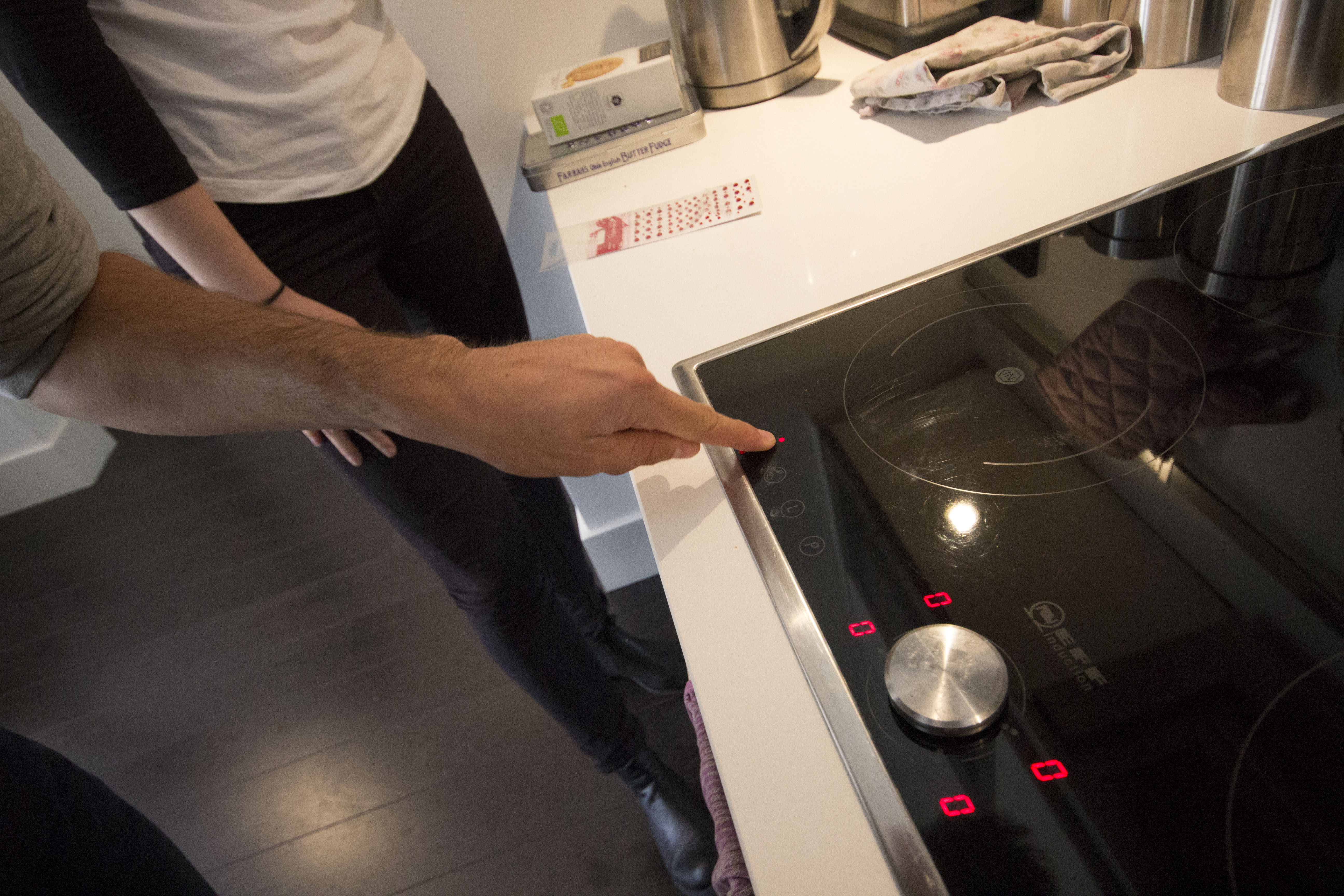 For the cooker, we marked out the on/off button with a large gem sticker, and then marked out regular intervals on the dial face with smaller gem stickers to indicate small, medium and high heat settings. Blindfolded, we found it effective in finding the right heat setting and turning it on. Clearly, this wouldn’t work for every appliance, but we’d made a significant improvement without a line of code. Both Michael and Courtney felt that this simple solution of raised stickers on the cooker hob and on a microwave oven took them a small step closer to cooking independently.

Do not over-complicate solutions

When we first started thinking around home automation, it was tempting to go crazy with all the ways technology could “solve” each and every need or want we uncovered in our research. The many everyday hurdles that, as designers, we identified as being problematic including how to know when to stop pouring water into a glass or knowing when to empty a bin – usually had very simple, practical and sometimes unexpected solutions. Putting your finger in the glass to tell the level, for example, or putting your hand in the bin to feel how full it is. There was therefore no real need for connected bins to send out push notifications, or digital receptacles to alert you as they reach capacity. By slowing down and listening to what vision impaired people were actually saying about solving problems, it was clear that less was more. 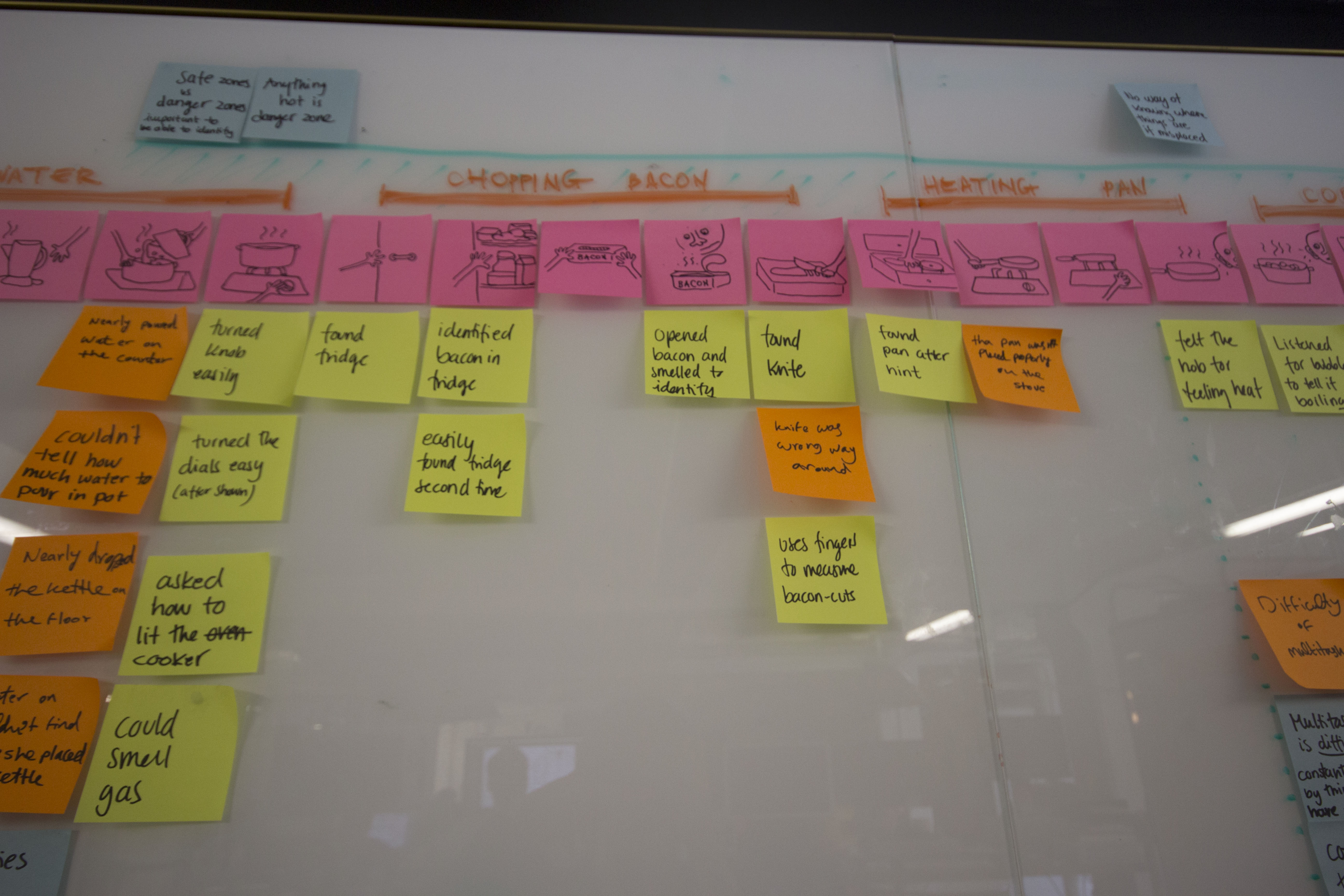 Another point was that more features didn't necessarily mean a better solution. It’s a well-known rule in software that 80 per cent of users only use 20 per cent of features, and it's here where we should be focusing the majority of our design effort.

As designers of digital products, we often look first to digital or technological solutions to the problems we set out to solve. We also sometimes hope to identify particularly difficult problems to work with.

In this exploratory research we learnt that a low-tech solution to allow someone to carry out a straightforward task can increase one's sense of independency and confidence. We also learned that independence is not something that happens with a wave of a magic wand or one single magical product – often, it's a combination of factors, in this case, safety, confidence and motivation.

Observing Courtney and Michael in their kitchens showed us that their social contexts play a big part in the type of tasks a vision imparied person would be comfortable undertaking. Usually, it's a task that they can already complete safely and confidently, and the tasks that they have problems with are often undertaken by a sighted person. Therefore, the opportunity to try to learn to do it themselves may not be presented, even if the personal motivation is there.

In the case of solving the problem with turning on the cooker hob, the solution this time was not a digital application or product, but a simple analogue one, in the shape of a raised sticker. This taught us that, as designers of digital products, we need to stay open to the possibility of ‘simple’ analogue solutions as much as digital ones. We need to look at the bigger social context of the people facing the problems we are trying to solve and reach further than only digital solutions.

We hope that by providing one small step towards making a problematic task easier, or “closing that small gap” in a user journey, we can shift a task from “problematic” to “do-able”.

Narges Jalali, Isabelle Bärgh, and Pearlyn Quan are interaction designers at ustwo. We were also helped a great deal by our intern Ty Lertwichaiworawit on this project.

If you are interested in the issues outlined in this post, and would like to get involved or find out more, you can get in touch with narges@ustwo.com, pearlyn@ustwo.com or isabelle@ustwo.com or Katherine Payne at the RLSB.