The theme at Media Evolution's The Conference 2013 is "Power, Disruption and Lies" (inspired by New Order's album).

The Media Evolution team invited us to get involved by writing a blog post around this year's theme. I've therefore decided to take a look at three industry lies (well myths) to get the conversation going.

The process of digital product creation is evolving so quickly that approaches we used a year or two ago are already verging on being redundant. We therefore thought we’d compile a list of things that we believe have changed, as well as suggest a shift in perspective designed to face the challenges of future digital product creation.

Betting too much on knowledge gained early in a project is very risky. Even if you have THE big idea, things always change. An example of this is the Scandinavian bank SEB. It was recently reported that SEB ‘wasted’ millions developing an internet bank service that was never used. How could this happen? They had done their research. In 2006 they conducted extensive research and requirements gathering activities to prepare them for the future of banking. In 2007 the iPhone arrived, and shortly after the concept of mobile banking (something inconceivable on 2006’s mobile devices). Unfortunately SEB’s new internet banking system could not effectively support mobile banking without further substantial investment. SEB eventually decided to kill the project 5 years later, with an estimated loss of 750 million Swedish crowns.

Obviously this is an extreme case. However all projects have hidden risks associated to unforeseen changes in markets or industries. To minimize risk, we believe in conducting enough research to formulate hypotheses for project success. We then test these hypotheses, reformulate them and test again. We are not afraid to kill ideas that do not work. We are not suggesting less research, but rather a continual iterative research approach that can run in parallel to other activities. If SEB had taken a similar approach, they would have been more responsive to change.

This summer we have been working closely with Skånetrafiken, the public transport supplier of southern Sweden. Instead of an extensive research phase we facilitated a series of Lean UX workshops. We helped distil their many different ideas and directions into a set of prioritized hypotheses. These hypotheses are now ready to be tested and refined together with their users with minimal risk.

It is a common mistake to believe adding more people will speed up a project. This is a lie (Well sort of.) Bigger teams can get things done quicker, but not proportionally. If you have a project that takes a team 10 weeks to design and develop, doubling the team will not ensure that the project is completed five weeks earlier. With the introduction of each new member, the need for greater co-ordination and communication multiplies. Add to this that it is more difficult to foster a culture of ownership and that bigger teams are less responsive to changes in direction, and the benefit of “throwing in” a couple of extra people is vastly reduced in a project that is striving to be agile.

This is why we like to keep our teams small. Initially we work in small teams to create a minimum viable product. Later we scale the team organically based on project needs and with the aim of always retaining the commitment to the final product. A clear example of this is our disruptive photo sharing service Rando. It was built by a two-person team over the course of a few weeks and has to date transported more than 12.5 million randos between completely random users. The team owned the product from start to finish and the feature-set was entirely focused around the minimum viable product. Download Rando and see what a two person team achieved in just a few weeks.

This is not true. Stop hiding behind process, methods and tools! Even though we are huge fans of Agile, Scrum and Lean we believe other factors are more important when it comes to creating success. Dig deeper! You'll need a group of passionate people who care about each other and the projects they work with. It needs to be a genuine value of your organization. It's not just about "implementing Agile". If two assholes read the same book about Agile, they will still be assholes.

Focus on people over processes and tools. This is ironically a cornerstone of the Agile manifesto that is commonly overlooked. At ustwo we believe motivated people can work with minimal management. Rather than having project managers chasing deliverables, we use team coaches to oil the machine and make sure the engine runs smoothly. Focus on HOW the team works together instead of WHAT the team is delivering.

We invest in our unique culture known as Fampany (family + company). Fampany is about caring for each other, but also being passionate about what we do. It is a culture of empowerment and ownership that manifests itself in our uniquely crafted digital products. We believe this is the foundation of our success. 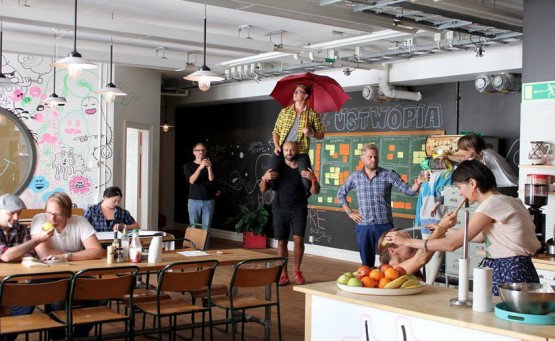 Do you agree? Disagree? Let us know your favorite lies. Tweet your #DigitalLies or add them as comments below. See you at The Conference!