Why You, Not Henry Ford, Should Design Your Working Life

Western middle-class living operates with a working pattern invented in the 19th century, grudgingly accepted by progressive capitalists like Henry Ford in the beginning of 20th century and finally written into law early to mid- 20th century in most countries. While certainly a lot of people realise this might not be ideal, just why are we — as a global society — so timid about changing this pattern?

Much of my argument doesn't apply if you’re struggling with low pay, shift-based work or live in a developing country, and these offer different problems. But many of you reading this post will be fortunate enough to be getting paid to think about and solve problems in creative ways. Yet we know that our brains are incapable of working at their peak, for hours in a row, whilst our bodies are tied to a desk and our colleagues are buzzing around us.

Chances are, you also earn more than you really need to, and spend the surplus on stuff you want but don’t need or have the time to enjoy anyway. Some of the nicest things that you actually need, and can really make you happy, don’t cost a lot of money – taking a walk in a natural environment, relaxing with people you like, cooking some fresh food from scratch, finding the time to enjoy a meal together with your family and friends immersed in conversations or keeping a gratitude journal.

So why do we still choose to join the rush hour congestion every day and, with that, collectively invest in expensive and destructive infrastructure developments just to serve these one-hour time windows? Or, why do we create a binary choice between unemployment and low paid jobs or burning out with no time to rest in sight until we retire, being too old and ill to enjoy it?

Is it about co-location then?

Yes, being next to teammates and interacting in person is something which can’t (fully, yet) be replaced by telecommunication, but do or should we have meetings all day with the same people?

Couldn’t we organise our discussions a bit more smartly into clusters — both within a day and a week — and spend the rest of the time away from the hustle of the workspace, with space to think when we need it the most? Wouldn’t we still have enough chance for serendipitous conversation between colleagues from other parts of the company if only we made sure to spend our lunch time and coffee or tea breaks in the communal area rather than in front of our computers?

What really changed my way of thinking about time is a brilliant and provocative study by the New Economics Foundation, called 21 hours (as in work week). In this paper they argue that by shortening our time spent at work we could decrease overconsumption, stress, and traffic congestion while increasing the number of people employed in quality jobs, community and political involvement, and general mental and physical well-being.

Once you stop looking at life as a treadmill of 5 long working days and a short weekend — barely enough to gasp for breath —and give yourself permission to explore what else is possible, magic starts to happen in your mind.

If you want a second opinion or to dig deeper, also take a look at the Institute for the Future’s Future of Work study. 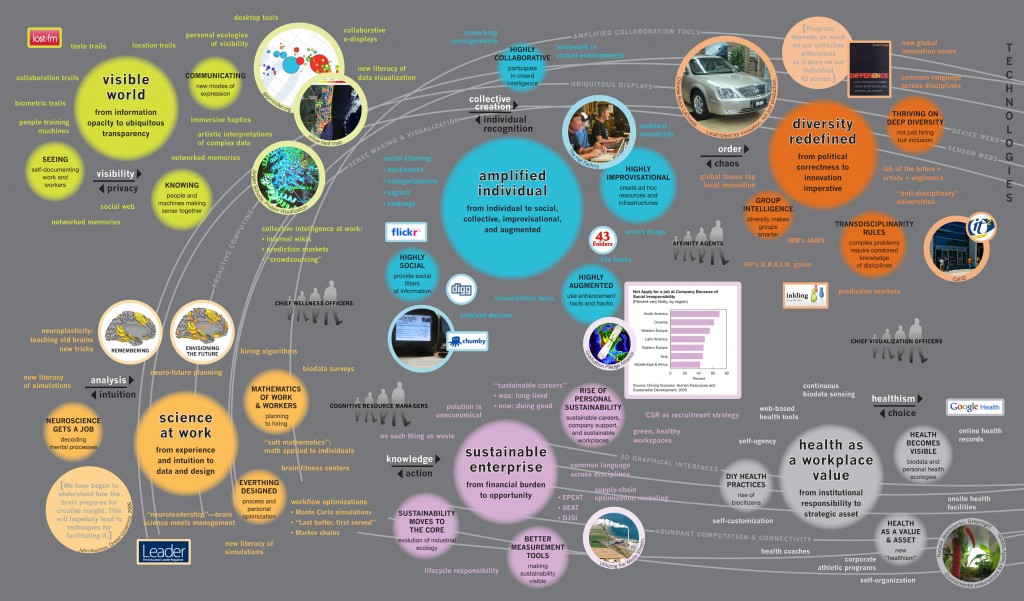 It’s all very well, I hear you say, but we can’t all just move to France, with their leisurely work hours, can we? Well, as an example there’s a law in the UK that allows you to ask for any form of flexible work arrangement and unless your employer has a very good reason why they can’t accommodate your request — which is unlikely for an office job — you should be allowed to have your way.

So this is exactly what I did, about a year and a half ago, just after my son was born.

My pattern is every Wednesday off with and an extra hour worked each day for the rest of the week. While first I thought about getting a long weekend, slicing the week into half and not having to work more than two days in a row — ever! — works incredibly well.

To make this happen I had to sacrifice 10% of my salary, which might sound a bit off-putting at first, but if you think of it this way – you’re giving up the highest taxed bit first, or you could also just decrease hours with the same percentage instead of a pay rise next time, suddenly it hurts much less.

Power to the parents

Apart from the decreased normal working pattern, I’m lucky enough to work for ustwo, where we have a progressive paternity policy, enabling fathers to take over maternity time from mother and topping up the statutory pay to full salary.

I can’t even begin to describe how wonderful it was for me to be able to spend two months during last summer with my little boy, but having some discussions with a few colleagues I realised that this paternal time off has profound implications beyond a healthier, more balanced child and less stressed young mother — if these weren’t enough already!

If men also take months off after a child has been born — and in general share looking after the little ones — the ridiculous and often subconscious stigma of mothers as “less dedicated” workers will all but disappear.

Needless to say I was more than happy to bask in the glory of a gender equality champion after this realisation, but this is just a small step to close the gap for a more inclusive workplace. For me personally that is, I can’t feel grateful enough for this forward-looking and generous policy!

Time to design your life

There’s no ultimate recommendation, as everyone's different, but you should give yourself time and space to think about what would be the best working pattern for you and what matters the most to you in life by filling in The Living Legacy workbook (PDF). As part of this you should realise that it’s not a lack of dedication to your career at all to find a sustainable way to give your best, instead of burning yourself out!

Daniel Demmel (@daaain) passionate about finding the right technological problem to solve, as well as environmental and social sustainability.

He's also particularly fond of finding and building the right tools, so nothing gets in the way of creating beautiful digital products. He holds a degree in economics but got drawn into the world of design and development when Photoshop was at 6.0 and Flash was at 5.