untWaves – Collaboration on a Global Scale

Can technology empower people to collaborate on a global scale? How can individuals connect and work together to tackle political issues that transcend national boundaries?

We tried to answer these questions when creating a digital product concept in collaboration with Simon Anholt, founder of the Good Country, a global movement about culture change. The simplest way to understand the Good Country is to watch Simon’s TED talk.

Translating the goals of The Good Country into a digital concept presented a unique and interesting challenge for us. With global collaboration as the focus and core mechanism to explore, we set out to examine what’s currently happening in this area.

The advent of social media has changed our behaviour in many areas of life – we perceive and participate in politics very differently these days. Many of us, who may not even identify ourselves as ‘political’, are, for example, following what is happening elsewhere in the world, getting live status updates from our friend's alerts and developing connections with others for social causes we care about.

Facebook, Twitter, YouTube and other social media have played a crucial role in motivating and mobilising masses, allowing people to circumvent censorship and detection by governments, resulting in significant social and political change. Examples include the Arab Spring, the Gezi Park Protests, and the Occupy movement.

Despite a wide range of existing instruments for political activism and social change, there is still plenty of room for a more focused tool aimed at bringing people together and facilitating a platform for global political change.

We found a lack of emotional engagement a common issue with the kinds of collaboration that happens digitally. This can hinder the creation of a sense of togetherness, and that's something we were looking for. One can sign an online petition and promptly forget about it – once the signature is gone, it is hard to follow up on what is happening with a particular cause, and particularly so in terms of your input. Sure, there are physical meetups and other ways to look at an issue collectively that derive support from the digital world, but often it is used simply to facilitate a meeting – essentially an invitation.

Waves takes its name and inspiration from the Mexican wave phenomenon seen in some big stadium events, when spectators briefly stand up and cheer in a wave that moves in a loop all the way around the crowd. This symbolic gesture aligns with our overall vision of creating a new kind of togetherness, uniting people around in a celebratory, positive fashion – a collective expression of a digital signature.

Using Waves as a tool, people share an existing story – of situations where countries act selflessly, considering the needs of others and not only their own citizens, a true global collaboration away from nation-centric approach  – or create their own about a local issue they care about.

A ripple is born in one location and, if there is enough support, its message will be passed around through a unified and collaborative human wave. The app will then notify each participant in the ripple (those already opted-in) and ask them to send their own bespoke digital signature, which they do by waving their phone (making use of the accelerometer feature). This small, additional physical gesture can be powerful and engaging if everyone feels they are contributing. So, person by person, a digital ‘performance’ of a global wave will unfold for users to participate and watch in real time. 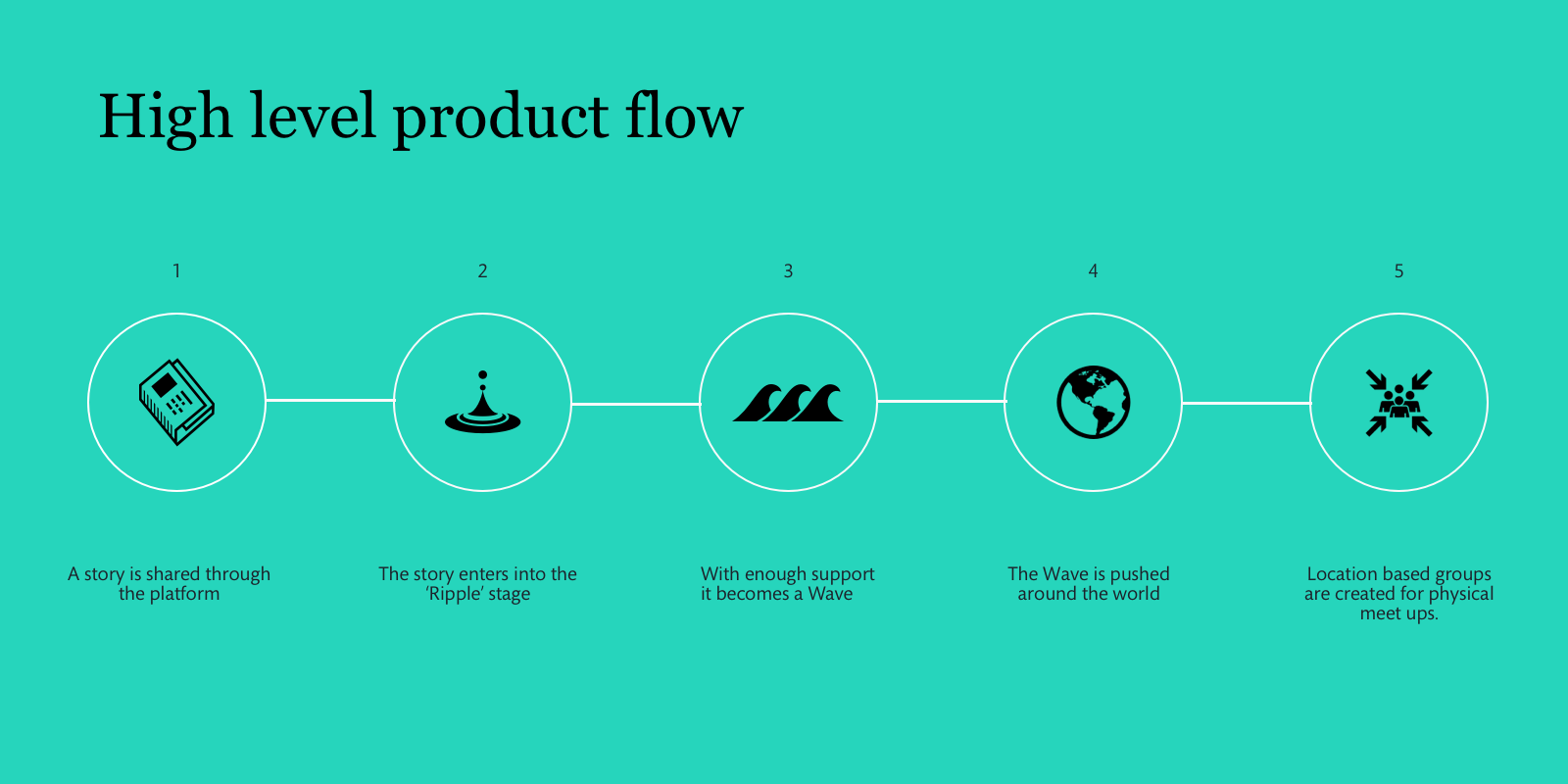 Waves’ main premise relies on user’s collaborative effort to spark off the digital wave, once enough interest is reached. Before developing our concept fully, we tried a lean experiment using Facebook, to test our hypothesis – that people will collaborate and validate the core engagement mechanism. A big question for us was:

Will people be prepared to participate digitally and commit to act in sequence?

In order to test it, we first approached Good Country members and set up a beta Facebook group and we asked people who showed interest to post their ‘personal wave’ at a particular time. Starting the wave from our London studio, we waited to see where our wave would travel.

Within a day, we'd recruited 72 people who ‘waved in’. Of these, 43 people actually took part, some even setting up an alarm clock to post their photos, so the chain wouldn't break.

Pleased with the results of our little experiment, we worked on the concept in more detail and put together a video to tell the story.

As much as we aimed for the digital performance as an outcome, we are also aware that unless the ‘noise’ created is brought back to the physical space and actioned, it will remain just a pretty thing to look at, without a real impact or disruption.

Therefore, an important aspect of the tool is to keep the individual ‘waves’ alive, and to branch out in different locations (similar to Black Lives Matter UK as a branch of Black Lives Matter) and facilitating local groups to meet up and take action as well as connecting with the original source applying learning from one location to another.

Change is happening in politics. People’s behaviours and involvement are evolving, and the old-fashioned political models are being disrupted. This is shown by the low electoral turnout in many mature democracies, which is particularly the case in the UK and US.

As with all other sectors, the transition from analogue to digital has been incremental. Just as the first TV shows started airing radio programmes with a fixed camera, we're seeing digital movements for social change following established analogue methods for political campaigning. Collecting signatures on a piece of paper has been supplanted by online petitions that achieve the same goal, but with the advantage of reaching greater numbers of people more quickly, and with the ability to spark engagement simultaneously in multiple locations. This is an important development that we believe will lead to a fuller exploitation of the possibilities that digital tech offers.

Waves is a step in this direction. We hope it can push the digitally possible and be a building block in the political evolution that is underway.

The team on this project featured Zeynep, Bill Barham, [Umesh Pandya](https://twitter.com/theuMe), Dan Ryan and Grant Liddall. If you'd like to discuss the ideas in this post further, get in touch – Zeynep@ustwo.com_