ustwo Auto and Mobility sat amongst a panel of industry experts discussing the topic ‘Mobility: Are we on the right track?’ which, as you can imagine, is of particular interest to us. We discussed everything from human behaviour to driverless vehicles – the panellists collectively bringing public, private, automotive, transport and city infrastructure perspectives to the conversation.

These themes, of course, are of global concern, so it seemed very appropriate that this week we kicked off a second event on these themes here in New York – a parallel, follow up event that focuses in on an area that proved to be of tantalizing interest in London. We touched on autonomous driving in London, but only scratched the surface. It’s exciting, then, that our expert panel in New York will be negotiating that path far more deeply.

Our very own Kota Kobayashi, a designer growing the Auto and Mobility focus in New York, moderated the expert panel consisting of (from left to right): 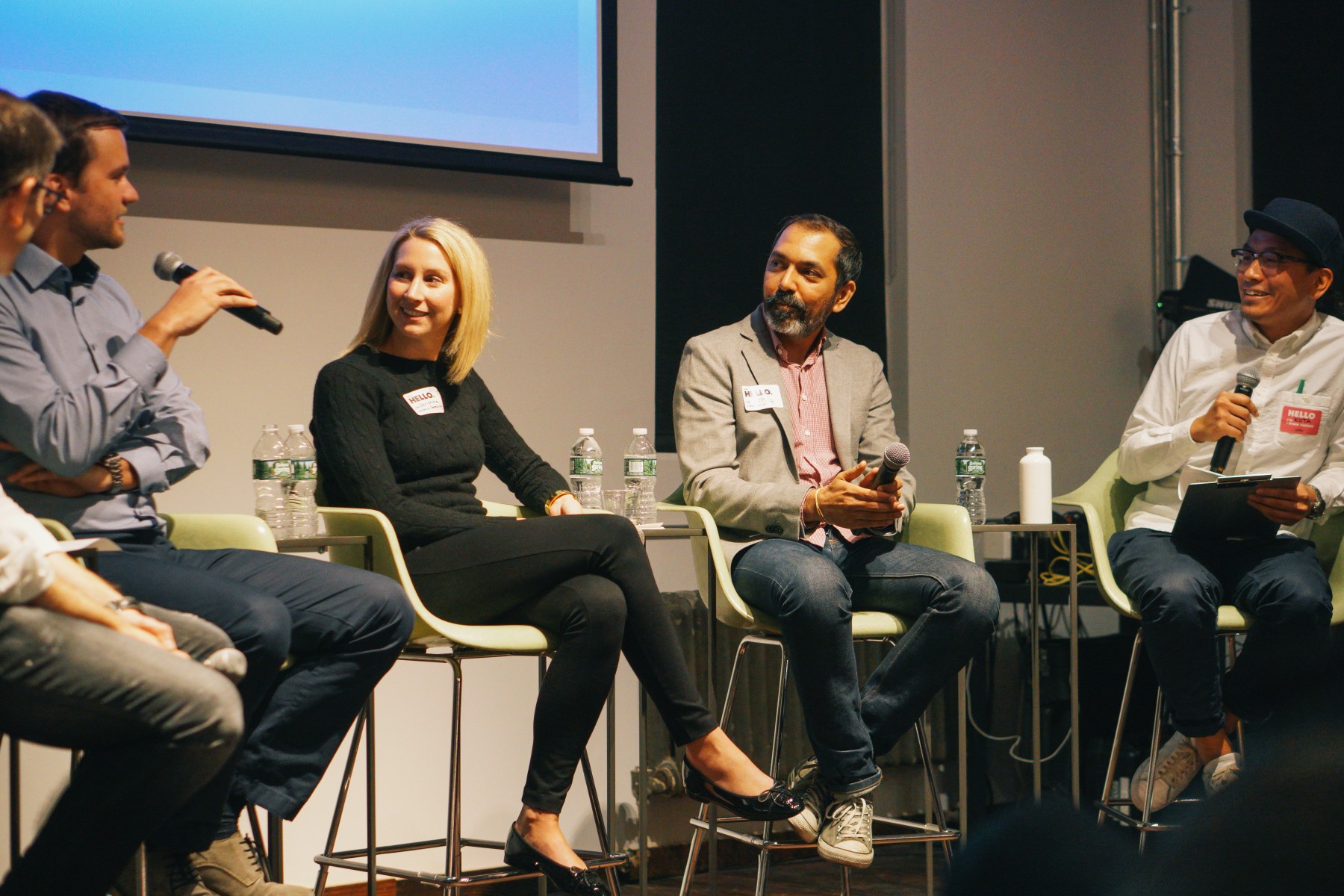 Autonomy is a loose term, often used as a catch all phrase for a myriad of other technologies. Driverless cars, electric cars and car sharing are all separate concepts – bedfellows and enablers to one another. Our evening discussed all of these concepts and more…

Some key themes emerged from the conversations on the day:

The transition to autonomy in modern cities poses great potential for changes in urban and suburban environments - and the panel agreed on that change with varying points of view.

Jan brought up a rather interesting notion that AVs (Autonomous Vehicles) might help people work far out from city hubs – as the technology enables passengers opportunity for productivity on the way to their workplace, cutting down on dead driving time. Vipul echoed this opinion and mentioned the huge potential AVs have to help cities expand beyond suburbs and utilise land previously untapped. The notion of earning back time is a concept we've also been discussing at ustwo Auto & Mobility. Autonomous vehicles should facilitate a way of life, rather than interfere with it – like plane and train journeys do. Passengers should be enabled to SPEND time rather than KILL time. 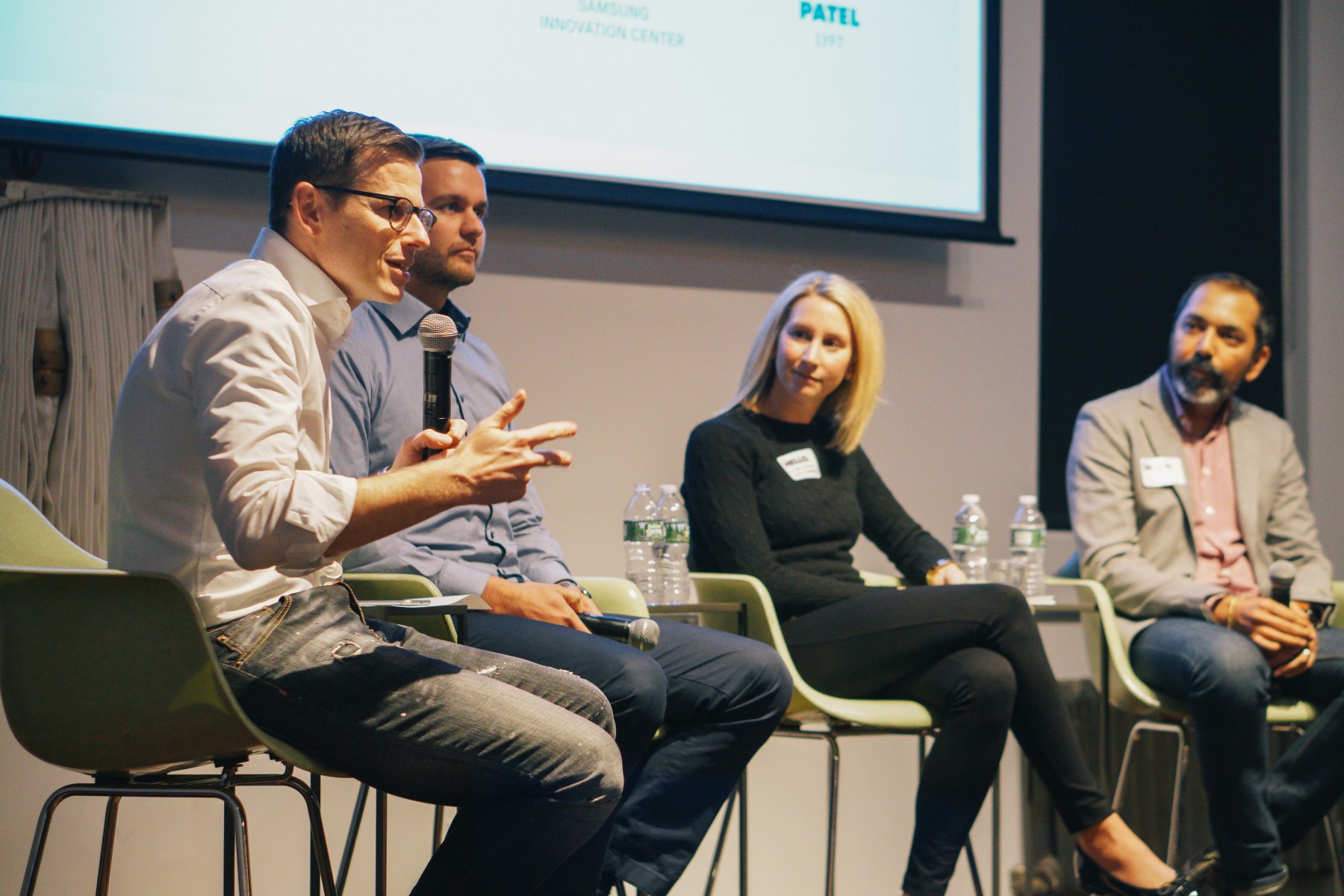 In contrast, Christian spoke about how AVs might bring into question the need for certain basic city elements like bus stops and petrol stations in the near future. For example, AVs coupled with models like that of Lyft and Uber might help create the notion of ‘drop-off’ and ‘pick-up’ points based on movement models among people – eliminating the need for traditional bus stops and freeing up space for other means such as bicycles. This is something we’re already seeing in Dearborn with Ford’s Dynamic shuttle service.

Christina in turn spoke about the tangential aspects of infrastructural change built on top of autonomy. AVs with vehicle to vehicle or vehicle to infrastructure communication could help create the “idea of frictionless movement”, where for instance cars could speak to traffic lights to create steady streams of moving traffic.

The advent of services like Car2Go and Uber has significantly impacted the notion of car ownership, a trend we see in crowded urban environments. Kota’s question to the panel was probing into the notion of how the introduction of AVs could impact this trend.

Christina and Christian agreed on the aspect that economic benefits of car sharing will fundamentally remove the concept of owning a car – whether autonomous or otherwise. In their perspective, ownership would not matter if a person could get a shared vehicle within five minutes as afforded by the rise in car sharing services. However, this doesn’t match ustwo’s point of view. In many cultures, such as in the east, owning a car is a status symbol, in the west a car can be a fashion accessory. There seems to be more to the car than simply getting from A to B. While we feel consumer-based car ownership will indeed decline, especially in megacities, ustwo believes that there will always be some people who will want to own their car.

Vipul threw in a fresh sentiment with the idea that car sharing in any guise belongs to the greater idea of “transportation as a service”, whether it is Lyft or Car2Go. These services will have inherent inefficiencies which might be improved by AVs when they have greater adoption. As an example, at the London event, we asked the question; “what would you do with cars not in use during the night?”. If they are autonomous, could they be given new functions, taking on the role of delivery or emergency transport – re-appropriating legal affordances to suit? 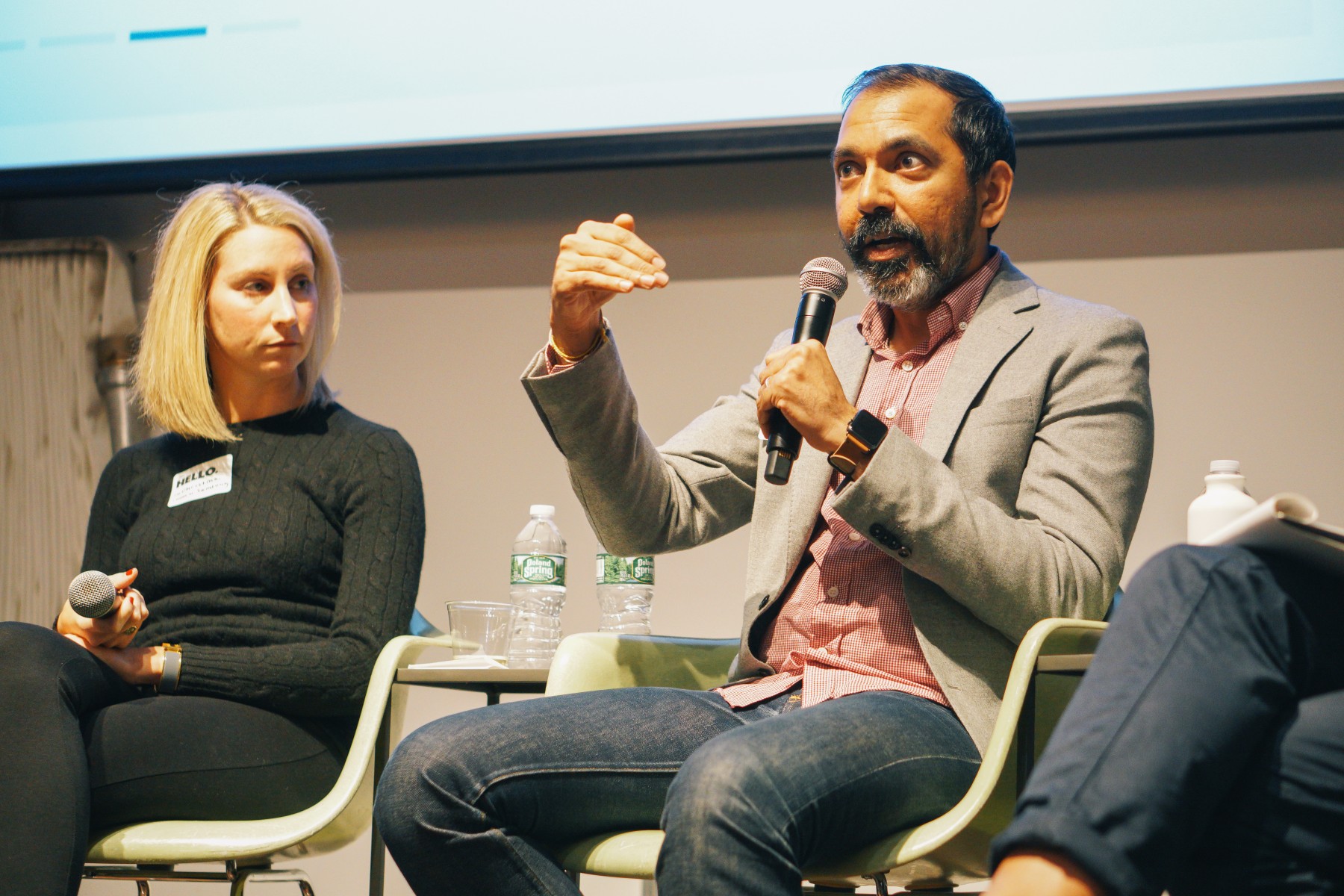 "This autonomous car space is the Wild West. There are so many people / companies that are trying to get there as quickly as possible… Who will rule the autonomous space?”

A question designed to provoke provided some of the most optimistic viewpoints of the day. A consensus amongst panelists was the fact that no one company would rule the space, since the only way forward was through collaboration – a popular theme at the London event too. Jan and Christina mentioned the need to search for the right kind of partners in the future with the stacks of knowledge individual entities might not have. 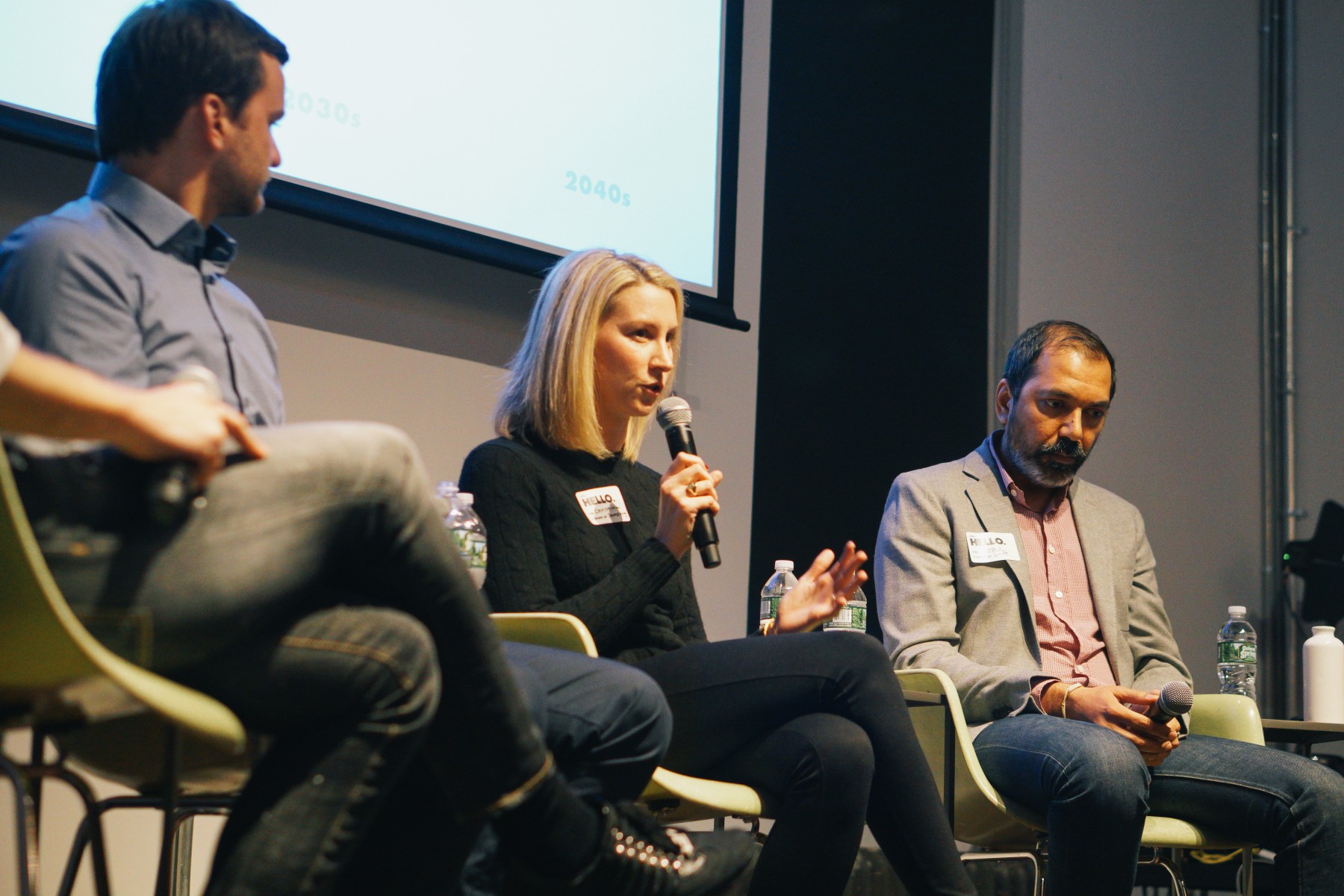 Vipul and Christian were of the opinion that there is value in each segment of AV production, delivery and service – car makers are good at building stuff, but Lyft / Uber will be better at customer service. According to them, the advantage would be with who would attain leverage at each critical point of the process - from which point they would either collaborate or acquire the rest of the segments.

An interesting notion presented was that of markets like China, where segmentation might not exist as car makers might merge manufacturing and service to create a compelling experience for users, making things difficult for western companies to compete.

4. Techno-optimism, Tesla and the bigger questions

Throughout the discussion and the Q&A afterwards, there was a tendency to lean towards a good amount of techno-optimism - where AV’s could aid in a positive impact to cities and its people. But some of the most poignant thoughts though came out while discussing topics such as education, tech adoption, user expectation and the rise of Tesla.

While expressing a great deal of admiration for Tesla’s achievements across the board, there were sobering notions about the way in which autonomy and the notion of car-sharing AVs has been rolled out. Vipul looked into his experience with Lyft for an example, mentioning his doubts about a premium car company reaching the ‘mass effect’, in which significantly dense networks of people and information could be mined to gain meaningful experiential impact. Aspects of this, such as predicting the right ETA from a service, needs such a data source.

Christian in turn spoke about the negative impact of software rollouts made by Tesla, where "car owners are the guinea pigs" to testing new modes of automation. Though data gathered via these tests aids quick development of autonomous transport, the lack of safe testing environments might cause more harm than good – both to the car drivers and everyone else working to make AVs and their adoption a reality. 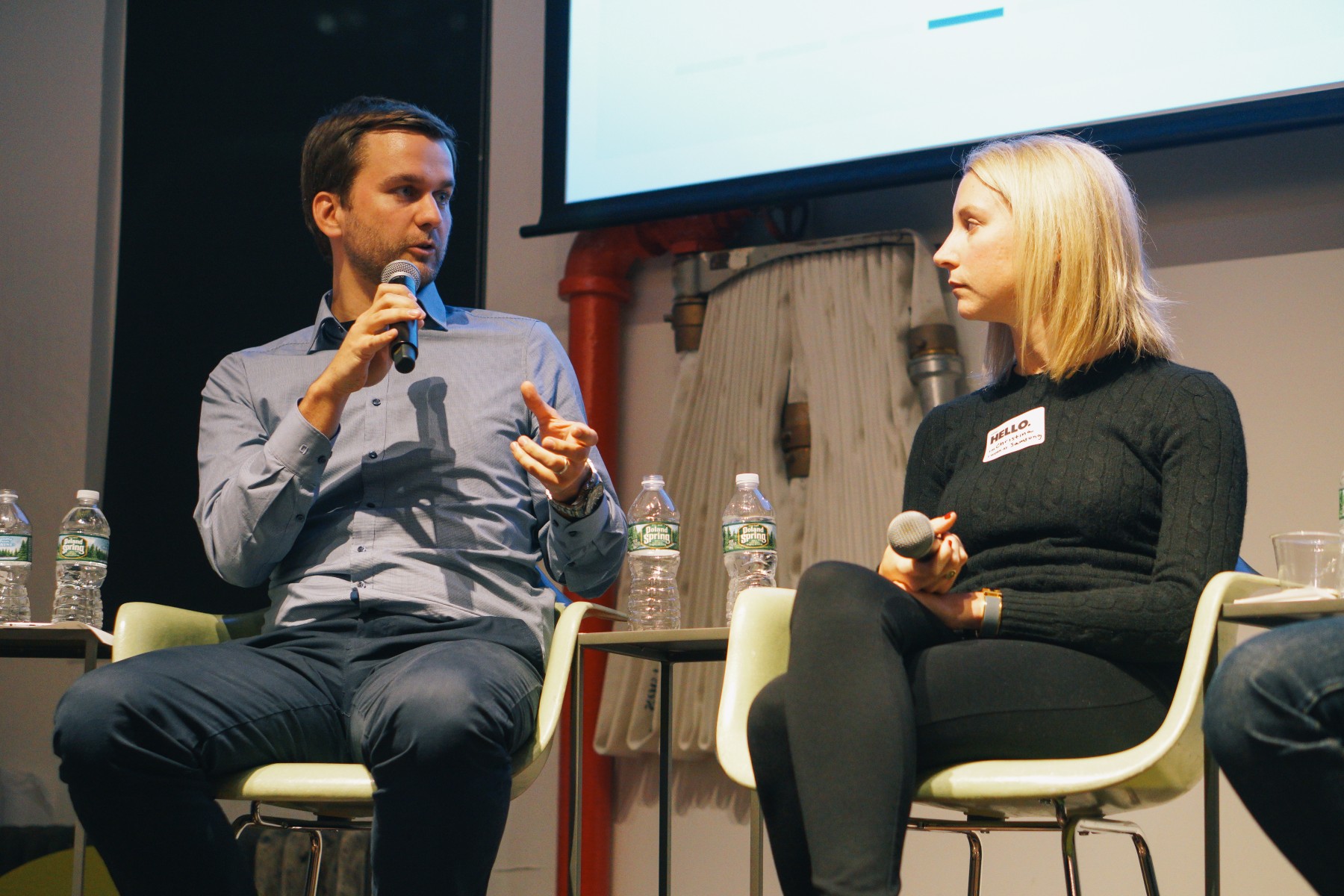 Tech adoption also brought about some interesting open-ended thoughts about the bigger questions posing a threat to autonomy. Christina brought into fore fundamental worries, for example how will we build ethical and moral systems into Autonomous vehicles when they are already a struggle for human beings to agree upon globally? Who will be liable when an AV misbehaves? These human factors are precisely the issues we identified in the London event, using MIT’s Moral Machine crowd sourced based research as an example of the complexities we face in rolling out autonomy.

A final theme to tech adoption was the aspect of education – brought about in the Q&A. Would there be a need to research into the way people feel about autonomy and educate them about its benefits to foster adoption? Christina was of the opinion that this would happen slowly – in baby steps. Revealing pieces of autonomy one at a time, incrementally educating people. Kota chimed in with his designer’s point of view, to use existing conventions that people already trust to help them understand technology. An interesting aspect to this was added to by Vipul and Christian, who mentioned that car/ride sharing schemes are great entry points for people to understand autonomy, since the convention of being “driven” are already in place and understood.

Food for thought indeed, and a great evening of debate and discussion. The mobility challenge is something we're working on and thinking about every day. You can read an in-depth whitepaper on our thinking about future mobility here. And if you're interested in solving some problems with us, reach out at mobility@ustwo.com. 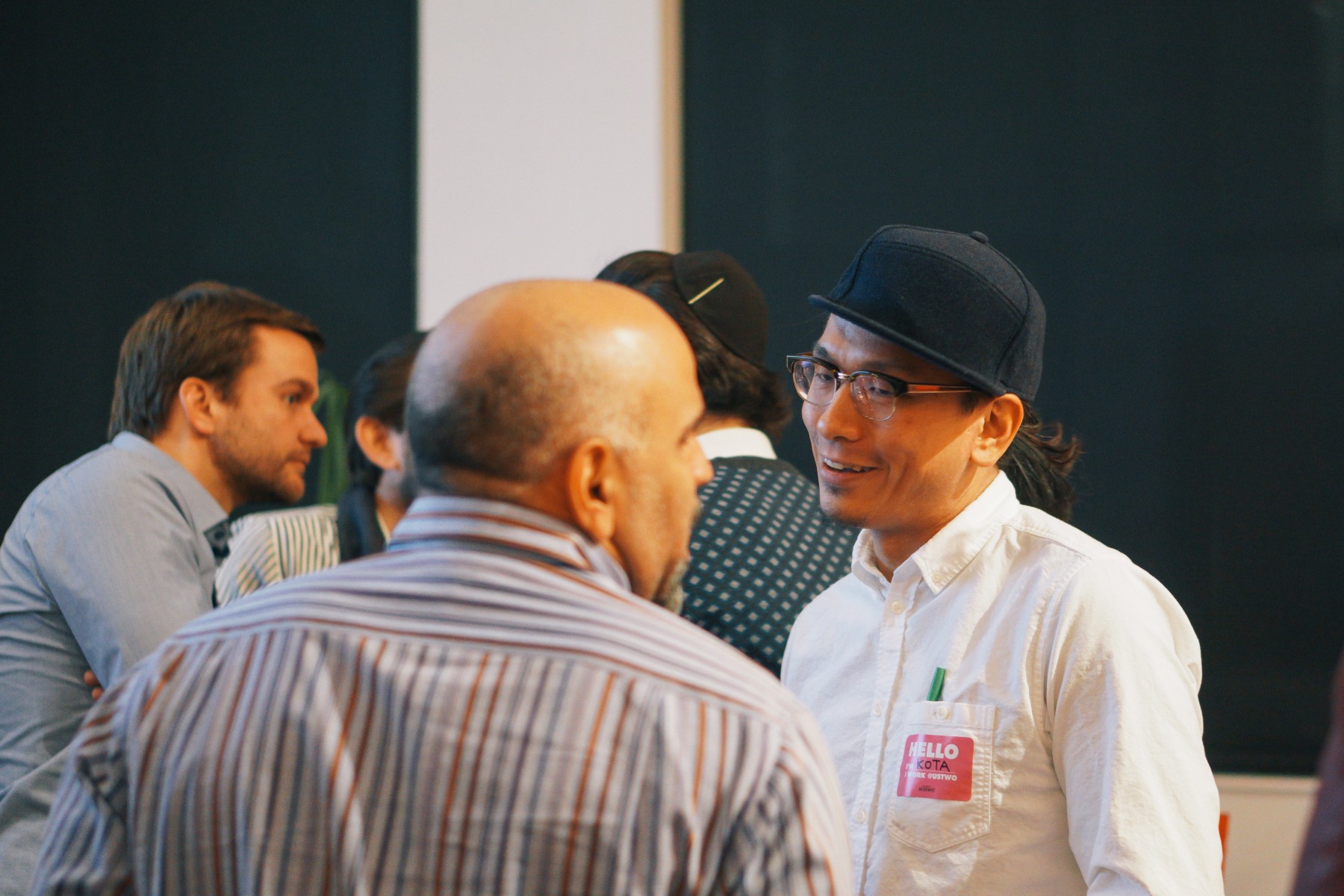