Two Steps Forward, One Step Back

At ustwo we often talk about things like benchtime, downtime and Invent Time. What we’re really talking about is that magical – and rare – gap between projects when we have the chance to really look at the problems and topics we are personally passionate about. Wayfindr, Moodnotes, and Keepsake were all born this way.

There’s a creative, productive tension between developing our own work to learn and experiment, and working with clients and partners to solve problems at scale. More often than not, we have to kill our darlings but – occasionally – the smallest experiment is enough for us to unearth a proposition that has traction.

Recently, our experimentation on how to approach conquering anxieties has been gaining momentum. Mental health drives so much of what we do. Alongside building products like Moodnotes and Pause, we’ve also supported events that help stimulate an open discussion of the topic in our studios. And now we’re forging ahead to build a community that talks about anxieties and encourages each other to overcome them.

Over the next few months, we’ll share more of the experiments we’re running in areas that reflect the passions and interest of the studio, but now we turn over to Rikke to elaborate on our most recent in-house work on overcoming fears.

Social anxieties are one of the biggest reasons for not achieving the things we want in life.  The fear of speaking in public, talking to strangers or just speaking our mind is something that affects us all. And it’s a problem that I’m particularly aware of. Two years ago, I would not have been able to publish a blog post or host a workshop. But I’ve overcome it, simply by doing it.

This method is also known as exposure therapy and it simply means you expose yourself to whatever you might be afraid of. Therapists use this technique to treat all sorts of fears and exposure therapy is proven to be the most effective treatment for social anxieties. And that’s great! But there are some problems:

This is a problem I wanted to investigate further during two weeks of downtime with my colleagues. One approach would be to build a technical prototype, but instead I‘ve been Pretotyping. Pretotyping means you don’t build anything, but instead do only what's necessary with users to validate our ideas and understand the problem better. In practice, this involved gaining insight from my colleagues and then pursuing further validation through digital channels.

The past few months I’ve been running personal experiments including high-fiving strangers, dancing Lindy Hop and hosting Fearshop. Recently I’ve started building on some of these ideas in the studio through my work with Yasir and Alex, who have enthusiastically embraced the challenge. We’ve been spending our time working out new experiments to test some of our hypotheses about social anxiety and how to treat it. 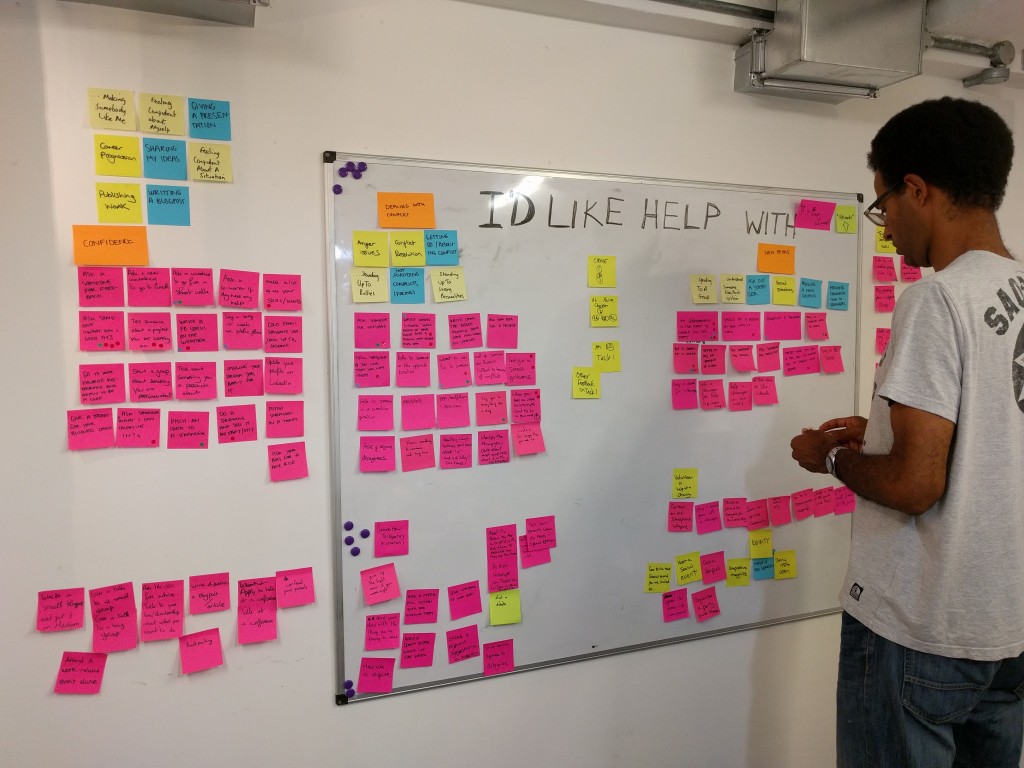 The first thing we did was to map out all things we’d personally like to improve on. Then we wrote down every action we could take to help us make these improvements.  In the end, we had about a hundred post-its – that's a lot of anxiety for three people to generate!

The next step was to pick a handful of the ways we thought we could improve, and then going out and doing them. This included putting ourselves out there by asking an owner for their dog's name and creating an opportunity to engage with a friend by buying them a coffee. 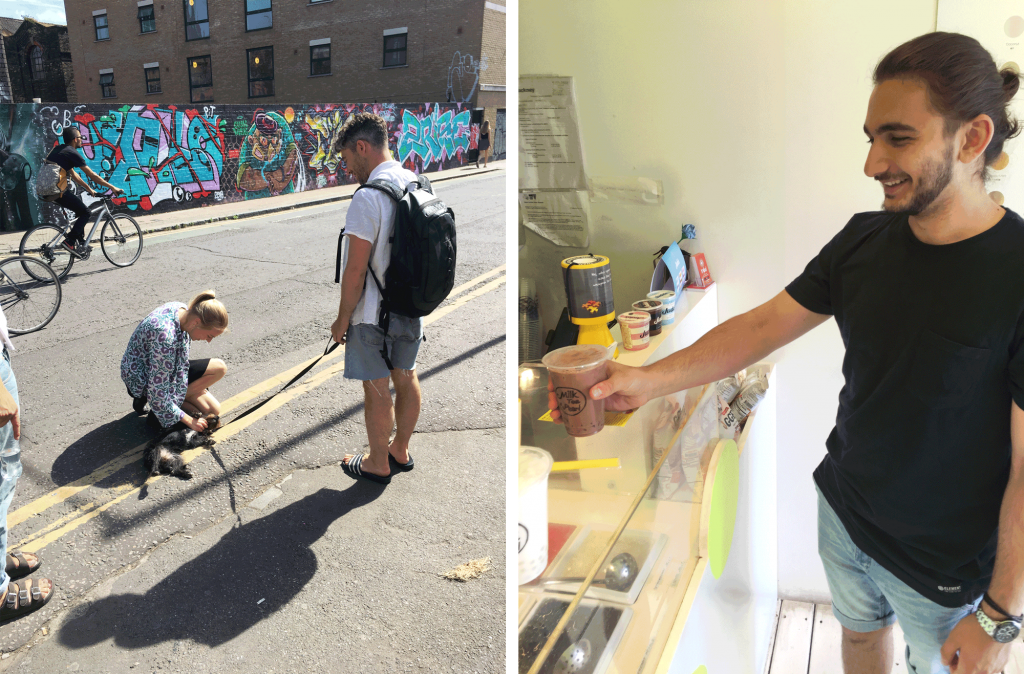 We realised quickly that we needed to get validation beyond our own anxieties, so we built a robot, or at least the next best thing – a Facebook messenger bot. A Facebook Messenger bot automates a conversation.

Using Chatfuel, we had a bot up and running within a day. About 20 people tested the bot and they weren’t afraid of sharing their feedback with us. This was our first step to getting out of the building and challenging some of my own hypotheses about how people want to challenge their fears.

What Did We Learn?

Exposing yourself to fear is really hard to do alone. And even though bots are cool to chat with, there is one thing they can’t recreate: the feeling of community. Luckily that is something the internet, and especially Facebook, is really good at.

At this point, we decided to move away from the bot and move to a community page.

The group has been live for a week and has more than 40 active users. Doing a lean experiment with a team of three means we took a pretty hands on approach. We shared seven challenges and people started to upload their experiences, share photos and talk about how the challenges went. Our intention was to create some small steps, but taking on seven challenges turned out to actually be quite a lot. Some people took on all seven, but most tried one or two and then fed back.

We want to let the community and users shape the product, and it seems like they have already started. Watching people support each other to overcome a challenge is an inspiring thing – just imagine if there were 1000s of people cheering you to overcome a phobia. 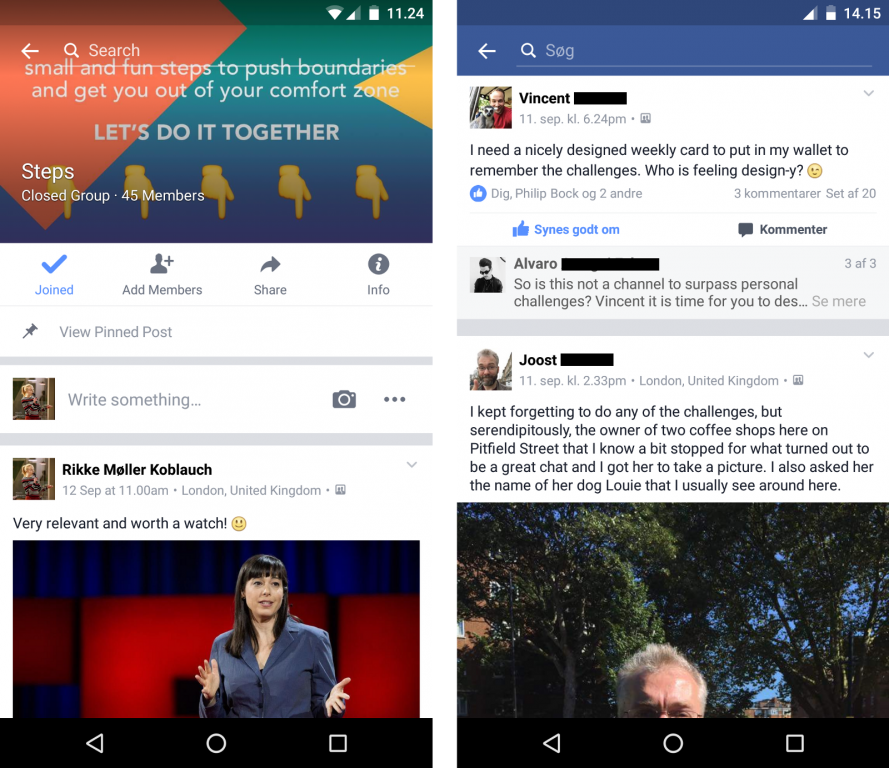 Tech is easy, humans are hard

Thinking we could solve a problem by building a technical solution was naive, it doesn’t work that way. The Facebook bot was a fast and easy way to test our assumptions but it’s limitations ultimately revealed to me that you need to start with the hard part – the humans – and then find a way to help your users from day one. Tech can’t do that now but it will be able to one day, and that’s exciting in itself.

Asking for help is not a weakness. And we need your help to build a community that talks about anxieties and encourages each other to overcome them. If you’re interested in being part of our fledgling community, or you’re experimenting in this space yourself, please get in touch.