At the end of April we noticed that Rando was becoming very popular in South Korea. Over the last two weeks the number of Korean users has continued to increase dramatically and along with them we have received a great amount of feedback. We have also received a huge number of complaints via email and Google Play’s reviews. The cause of these complaints? The “Sea of Japan”.

Rando uses Google’s Static Maps API to provide map images for rando locations on Android. These maps are not interactive and use a fixed zoom level. Unfortunately, the zoom level we use does not show both the “Sea of Japan” and “East Sea” labels for this area and as a result many of our South Korean users were not happy.

While we had contacted Google to inform them of this issue we wanted to try and see if there was anything we could do ourselves. We decided the fairest solution would be to remove the label completely from our maps since we did not wish to cause our Japanese users offence either. Our aim was to draw a mask of sea over the label to hide it from view. The location of the mask would need to adjust depending on the area of world visible in the map. 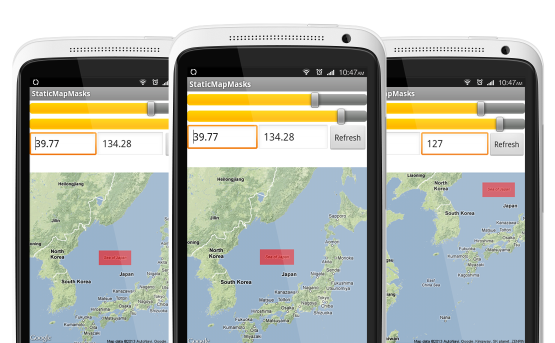 Google Maps use a variety of coordinate systems and provides example code that allows you to easily convert between them. This allowed us to specify mask coordinates in degrees of latitude and longitude, then for any given map image and zoom level we can translate our mask directly to pixels and draw it onto the image. By translating the mask coordinates this way the mask is always placed in the same location relative to the “Sea of Japan” label. This overcomes issues relating to Android’s vast range of possible screen sizes and the distorting effects of the Mercator projection used by Google Maps.

Within two hours of posting our updated Rando build to Google Play our analytical tool reports that over 1,000 map images have been masked. We hope the solution is agreeable to both our Japanese and Korean audiences and that they can continue to enjoy sending and receiving Randos worldwide.

Download Rando from the App Store or from Google Play now.