Apps now are what websites were back in 2000. Everyone wants one regardless of how it fits their brand or product. They’re a must-have in any business strategy and one which companies are throwing tens of thousands at so as to have a “presence” in the mobile space.

But for every well thought-through app which is genuinely useful, there are at least a dozen gimmick apps with a tenuous link back to the brand. Carling’s iPint was probably the most famous of the latter and helped kick off the gimmicky branded-app trend back in 2008. Fast forward to 2012 and Budweiser have one-upped them with an app that lets you hold a miniature FA Cup. Embedded content: http://www.youtube.com/embed/5bLfD6YPppc?rel=0

Knowing the potential of the platform, it pains us to see thousands of pounds and scores of hours thrown at apps which a user has on their device for less than a minute and and then deletes forever.

We’re not guilt-free when it comes to digital gimmicks. Our very own Mouth Off™ was as gimmicky as iPint. And like iPint, it managed to go viral.

We even turned it into a branded app by retrofitting it for the Cartoon Network, releasing a Ben 10 version of it.Embedded content: http://www.youtube.com/embed/pjxf1tvvKlQ?rel=0

But after having done well on a gimmick app, we started to see that apps could be much more than a giggle around a pub table. The combination of processing power, uninterrupted Internet connection and awareness of context in today’s devices means apps are capable of extending a brand’s role into a customer’s day-to-day life.

Nike+ GPS is perhaps the best example of this. By using a combination of GPS and accelerometer data, the app allows users to track their runs, give encouragement and challenge their friends, all values which resonate with the Nike brand. 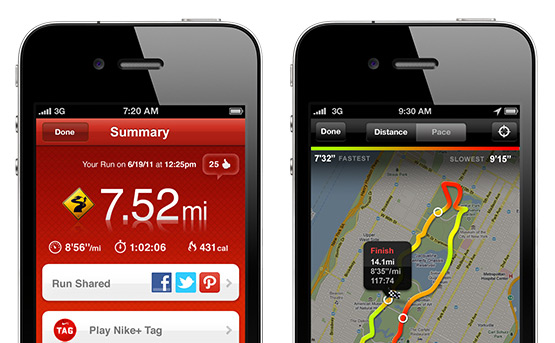 An app that’s carefully considered and serves defined need in alignment with the brand objectives is always going to be “stickier” than an app which isn’t. A gimmick, no matter how cute, is not going to have the same stickiness as an app that your customers rely on as a tool.

Taking a user-centric approach to apps and making sure they offer genuine utility, rather than deliver short-lived relevance for a marketing campaign is the best way to take advantage of the opportunity this brave new digital world offers.

A word or two of advice: if you’re thinking of developing or commissioning an app, work closely with the businesses and the customers you want to reach, and make sure you use these devices as a platform to build products on—products capable of truly engaging customers for much longer than a minute-long giggle. Lest your branded app end up here.