Orsilus: From Side Project to Soft Launch

As a developer, I love to spend time outside of work testing out new hare-brained app ideas and low-level algorithms. It gives me a chance to use skills and follow passions that sit outside of regular work.

However, working in the digital industry, there can be friction between what you do at work and what you do outside of work – but not at ustwo. Supporting those who choose to work on a project outside the studio is something engrained in our culture.

This was clear to me at my first interview. I asked about side-projects and was pointed to numerous side-hustles such as Alvaro’s black and white photography app – which I found particularly interesting as I’m an amateur photographer myself and use loads of creativity apps – and WhatTheFood, a team effort from ustwo employees that helps people better understand food menus. What’s more, throughout the three-year development of my passion project, music making and mixing tool Orsilus, people have actively gone out of their way to help and encourage me.

In this post, I will share some of the lessons I've learnt from developing and launching my own product as well as looking at how, with mutual support, this can fit alongside a day job and help both the individual and company step up.

So let’s go back to the beginning, and to my inspiration for the Orsilus app…

In a previous life I was a music software developer, and from an even younger age I have been fascinated by music, computers and making things. About three years ago I decided I wanted to transform one of my small audio apps into a fully fledged music app, with the key features both myself and the musicians I know would want to see. The two key areas I picked out were:

In realising this idea, I drew a lot from my own experiences as well as those of friends and musicians. After a year or so, I had managed to put my ideas into a basic MacOS App prototype. The main idea was to offer a basic visualisation of the elements in the user's song to help objectify the mixdown process – mixing down is the art of balancing, applying effects and generally tweaking all of the different instruments or sounds in song to make the well-balanced and cohesive overall sound. Once done, the separate parts are 'mixed down' from the individual instrument parts to a final stereo file – which is pretty close to the file you download from iTunes. 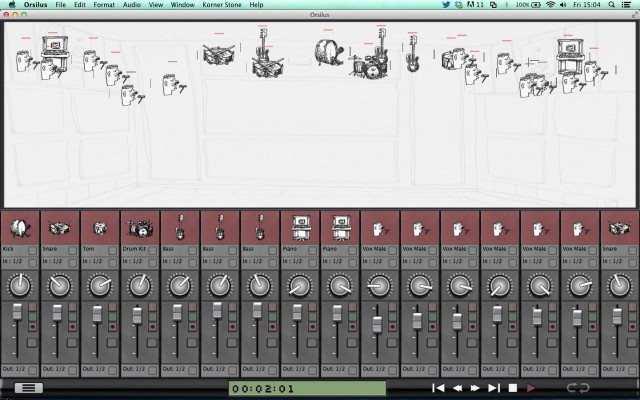 Visual Design for an Audio Challenge

When learning to mix down, many people approach it by closing their eyes and imagining all of the sounds are in the room in front of you, using the space to position the instruments. My app works by very simply using icons to represent each instrument in the song and plotting them on an x-y view. It uses the x-axis to represent pan, or the side (varying from left or right) the audio would come from, and the y-axis represents the volume of the instrument. Ideally, I'd have done the entire thing in 3D – using depth to change the sound level as the instrument moved further away from the user.

However, I decided to keep it simple and iterate towards that goal. The reality is, this would have been a behemoth task for my initial soft launch: a 3D mix environment would mean having to create all the room elements in 3D, which would have required a 3D designer, having to create or use a 3D rendering engine like Scene kit or build one from scratch – which would have taken months. Also, there is the challenge of getting adequate performance from a real-time audio engine while trying to render a 3D scene. Essentially, I decided this other dimensional challenge would be one for a later date – when I had the time and resources to do it justice.

As my idea began to take a fuller shape, I started showing it to people and ended up being invited to present it at a Music Tech meetup event being held at the ustwo’s London studio. A few months later, I was offered the opportunity to work at ustwo. It was through my new job – working so closely with designers and watching them in action, that I realised that I needed to step up the visuals on Orsilus. As a result, I began to reach out to people in the design community for insight whilst I continued to work on the ever-growing audio engine.

Steadily, the design help I received started to improve my own make-shift design skills – the app slowly began to look and feel a bit more like I had envisioned when I first dreamt it up. Thanks to the support I received the UI became flatter and mostly vector-based, allowing it to scale very easily.

Whilst I took an incremental approach towards developing 3D capabilities, there were other areas that I over-extended for the initial soft launch. In particular, I feel I was very – if not too – ambitious when it came to the collaboration tools.

I invested a lot of time developing a backend and user management system, which allowed a user to log in and send messages to one another in real-time. In the app, a user would have an account with profile image, as well as a list of conversations and groups they are part of – these could be with collaborators, producers or you band mates.

The idea is that you can double tap anything in App and instantly share it with your collaborator with a few clicks – that could be any audio, an effect preset you applied to your voice, a set of effects you applied or even the entire project. The app would take care of packaging the project, compressing, uploading to Dropbox and informing the other user. However, as became apparent after the soft launch – these features were high-maintenance and not that widely used.

As my idea got closer and closer to completion, I began beta testing with friends and family. My colleagues were a great resource both for advice on how to approach testing and also for testing on the product itself – especially as there are plenty of in-house musicians to hit up for feedback.

Once all this had been taken on board, I did a soft – very soft – launch on the AppStore. I would describe the response as mixed. I quickly learned that not many people were using the sharing functionality in its current form, though the idea did appeal to many of my potential users. Audio features were top of the list with the top three requests being:

Not only was there low-usage of the sharing features, I also found myself spending vast amounts of time fixing back-end bugs, message histories and friend statuses. Reality dawned on me – I wanted to build a music app… not Facebook or WhatsApp. So I reverted to plan-B: I always had iMessage integration in one part of the app offering a slightly less integrated version of the collaboration idea. So I made a decision to move to a conversation system based around Dropbox and iMessage which would save me time and allow me to concentrate on the music-based features people were asking for.

My current focus is to develop the visual mixer further, I want to add some basic algorithms to make a better connection between where an instrument is in the room and how it sounds. Then I plan to take another step back – really look and listen to how people are using the app. Now I can see data on which features are being used and which are not, there is a real opportunity to fine-tune the app.

Finally, I would like to get more musicians involved and look more into how to market the app better in time for a proper rollout. Ohh and fix the inevitable bugs that come up…

Contact me if you want to know more: jamaine@ustwo.com