A defining moment occurred in the mobile payment space this week, with Apple finally incorporating Near Field Communication (NFC) into their latest iPhone 6 release.

NFC is the backbone technology that enables contactless payments, and its inclusion is a strong signal from Apple – ending the 'will-they-won’t-they' equivocation shown so far. Coupled with this is the release of Apple Pay – their move into the much-hyped, but underperforming, mobile wallet space (Google Wallet, V.me and Square Wallet have all failed to register mass interest).

Apple Chief Tim Cook hit the nail on the head when introducing Apple Pay: “Most people that have worked on this (mobile wallet) have started with focusing around a business model that was centred in their own self interest, instead of focusing on the user experience. We love this kind of problem. This is exactly what Apple does best.”

And boy, what an amazing response to the problem. Not only will this likely prove to be a brilliant strategic move, it marks the dawn of a payment revolution now that iOS has joined Android along the NFC path.

So let’s cover a few of the reasons why iPhone 6/Apple Pay will be so successful:

During recent research into the Android payments space, we discovered a usability hurdle with the number of steps required to facilitate a tap and go payment. First, you will likely have to unlock your phone via numeric code or swipe, and then follow this with a second security password or challenge within an app to instigate the NFC capability.

Which left us thinking – was this Android experience really any less effort than reaching for your wallet, removing your contactless card and tapping? In contrast, the iPhone 6 experience is simple and straightforward. All that’s involved is a single touch to the device once held over the contactless scanner, with the Apple’s Touch ID the critical factor here. Too easy.

Apple tackled these head-on within the keynote, clearly aware of consumer hesitancy about mobile payments.

From a privacy perspective, Apple were keen to point out that they will not be privy to transaction value or the details of a purchase. This is fascinating, and telling, as Apple are prioritising user perception of privacy over obtaining stock-take-unit (SKU) data. In regards to profiling consumer behaviour, SKU data can deliver immensely powerful insights and has been an intentional play so far for many digital wallet platforms.

In the event of a lost phone, there’s also the ability to suspend all payment capability via the Find My iPhone app. The real genius comes, however, in the fact that the device does not store the card number itself. Not only does this alleviate general security concerns, it does away with the need to cancel and reorder a card if the device is lost.

Unlike Touch ID at first launch, Apple will make this available for developers to integrate into apps almost from day 1. With this open platform philosophy, allowing anyone to create their own application using the technology will encourage participation and innovation. From a press release: “Starting from October… Apple Pay APIs will be available to developers in iOS 8 so they can enable purchasing physical goods within their apps on iPhone 6 and iPhone 6 Plus."

With 800 million iTunes accounts, Apple already has 800 million card numbers. A fantastic leverage point, especially when the setup process includes a ‘Use Card on File at iTunes’ option. Apple have been sitting on this asset for years and hence it’s no surprise to witness such a calculated and well thought out play into the payment space. 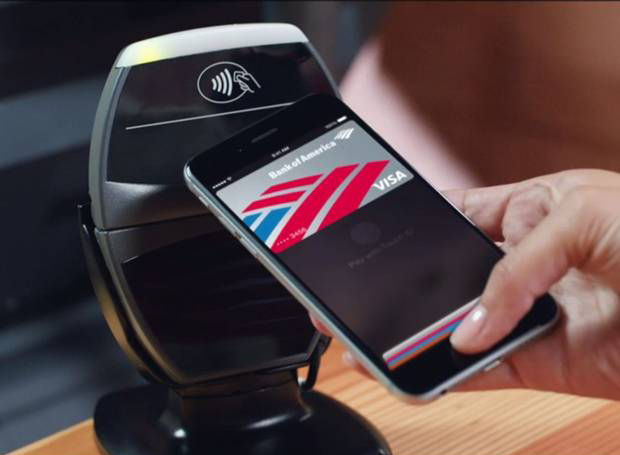 Where’s the opportunity then?

Let’s look ahead though, and try to understand what this means for the payment ecosystem.

Consider the concept of a credit or debit account that doesn’t require the provisioning of a plastic card. An account without a card, in other words, and now quite plausible given these developments in NFC/contactless tech. Let’s then focus on the account application process – given there’s no provisioning of a card, would it then be possible to jump from account application, to payment all in a matter of minutes and all on a single device?

There is currently a wasted time-lag with any account application process. Let me explain – you’ve just decided to sign up for a new card which should be a celebrated affair. Instead, you have to wait anywhere up to 2 weeks to receive your card in the mail before you can spend. This risks loss of momentum and not instantly harnessing the initial desire shown to transact with your new credit/debit facility. Given that a key objective from the issuer's end will be to encourage that first purchase (a key factor in long term retainment) there’s a real opportunity lost here.

Even if limits need to be applied around this notion of instant credit, providing a product that allows accelerated transition from first application to first spend will be a game changer.

Are consumers ready for this?

Although there is hesitation amongst consumers about using mobiles for payment, trends indicate that users are becoming more reliant on mobile and more comfortable with broadening usage areas. We’re becoming increasingly relaxed about performing more and more tasks using the mobile. Take online banking for example: Ten years ago who would have thought that traffic via mobile would surpass that on desktop? Perceptions change and we become less averse when seeing benefits to convenience and immediacy.

Granted, there will still be a demographic that prefers plastic. Also, to state the obvious, a physical card does not require battery power. So I suspect cards will still remain in the wallet for some time, at least, to provide a backup. However, don’t be surprised to see card issuers actively encourage the use of virtual over plastic. Consider the cost benefits of diminishing reliance around the physical provisioning of cards - creating less plastic, mailing less plastic, replacing less plastic.

In Australia, two out of every three Point of Sale (POS) terminals accept contactless payments. In a market where smartphone penetration is high, it will be very interesting to see the level of adoption.

In the US, however, contactless POS reach isn’t quite the same. So, to reach worldwide critical mass, the US will need to focus on developing this merchant-side infrastructure, as enabling the consumer is only half the picture.

It is worth noting that I haven’t even touched on what Apple Pay will do for the online payment space through delivery of a very compelling ‘one tap checkout’ capability (worth checking out), and there are certainly further implications for the payment space to be explored.

In combination, the iPhone 6 and Apple Pay will play a significant role in the decline of physical credit and debit cards and, without doubt, prove pivotal to the mass adoption of mobile payments.