Cultivating the Internet of Things

You may have heard the term ‘the internet of things’ (IoT) before, and been puzzled about what it means. The irony is that most of us, whether we’re aware of it or not, already interact with IoT constantly. Simply put, IoT refers to everyday objects that are connected to the internet in order to extend their functionality. Have you ever heard of those washing machines and tumble dryers that alert you via your smartphone when your laundry is done? Or Samsung Smart LED lightbulbs that you can control on your phone from across town? Well, they’re all part of the IoT phenomenon. 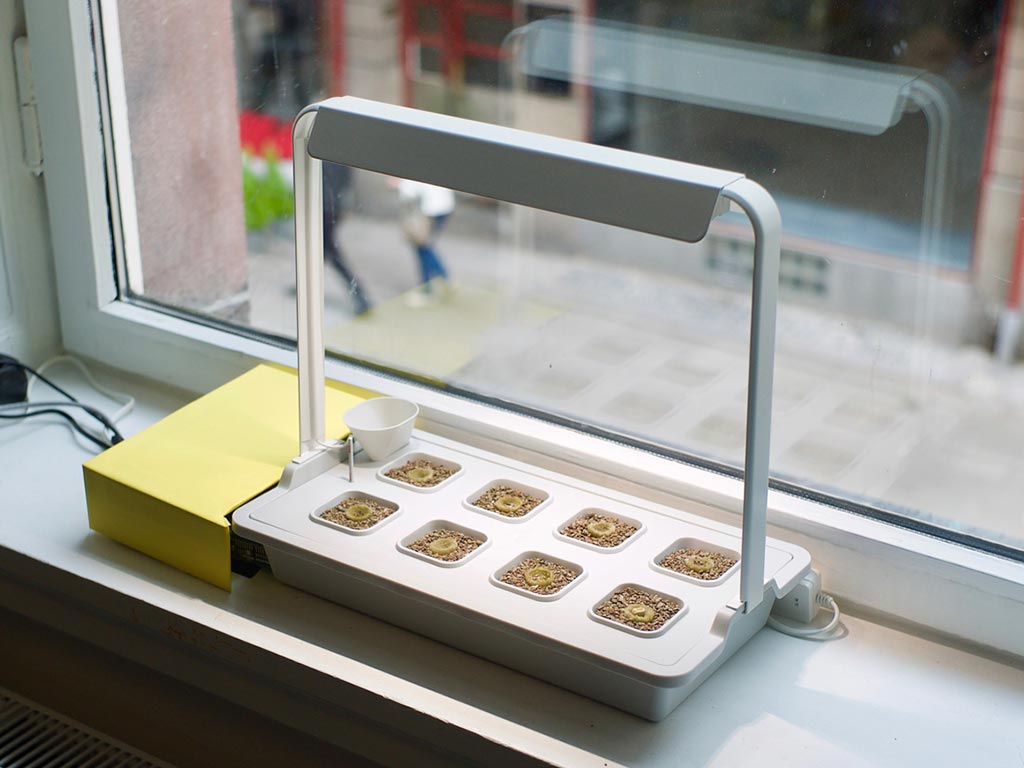 The term was originally coined by technology pioneer Kevin Ashton at the turn of this century, which shows that the concept of connected devices has been around for quite some time (in tech years). But more importantly, the term’s longevity has indicated that the IoT is here to stay, and the number of connected devices continues to grow exponentially. Expert predictions about the future of IoT have fluctuated widely, although they all see staggering growth in the sector’s future. According to Research and Markets (2016), the IoT market size, in terms of value, is expected to grow from USD 130.33 billion in 2015 to USD 883.55 billion by 2022.

Since we’re dedicated to being at the forefront of innovation, we aim to embrace and explore anything technology-related, especially stuff that’s hackable (fun!). Here in the Nordic studio, we started taking things that weren’t initially part of the IoT and connecting them ourselves. By doing this, we managed to extend the functionality of the objects. At first, there were much simpler projects like controlling the lights in our studio meeting rooms on our phones with NFC (Near Field Communication). We developed a notification system that alerts everyone in the studio when the coffee’s ready (we need to focus on what’s important, of course). But we’re also looking to use our skills and knowledge to build things that have slightly more practical applications for the consumer market. We like to try to use any spare time we have here for interesting projects, and this time, our developers Kenny and Erik decided to take on an IoT project. 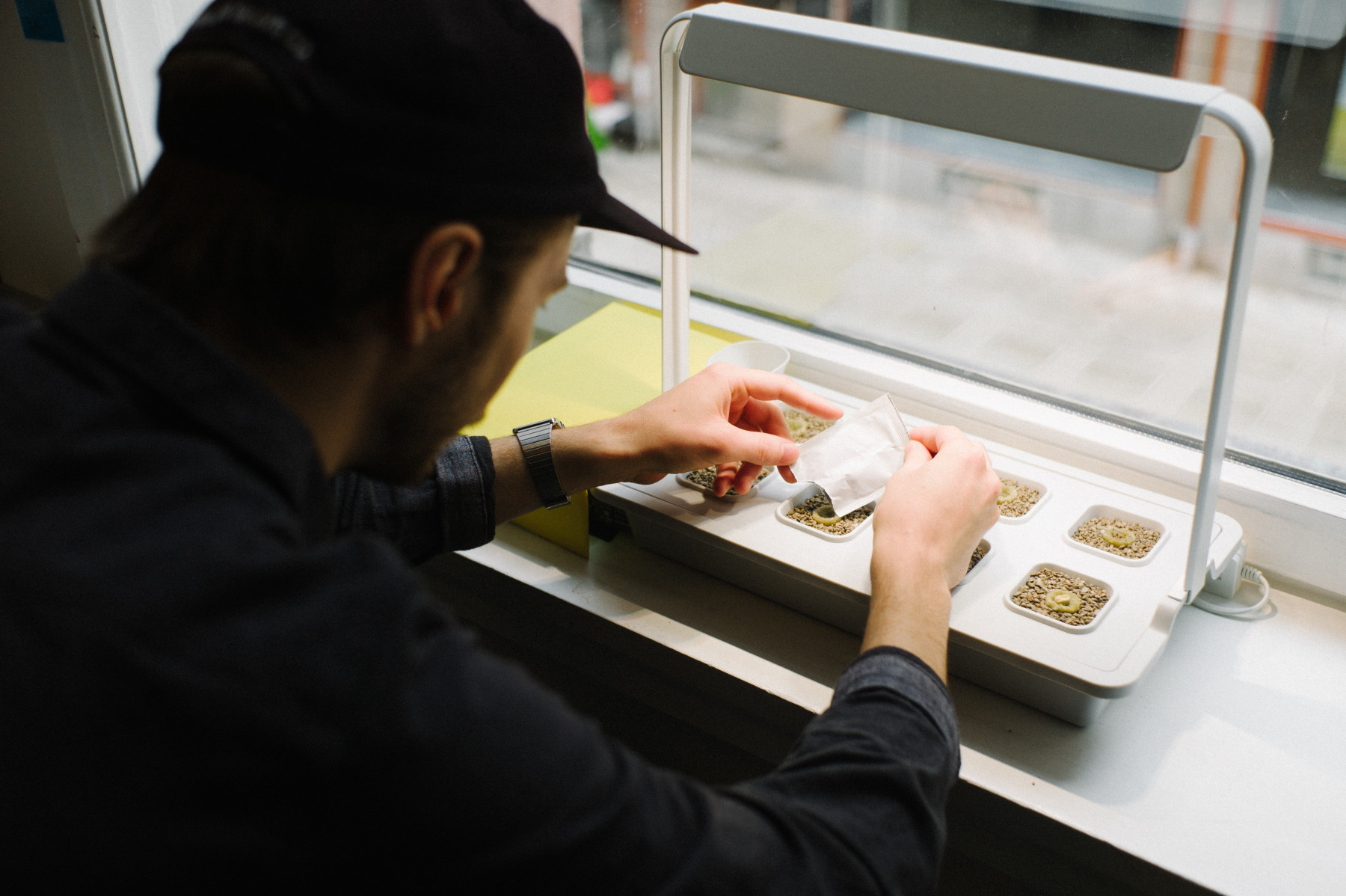 Our first mission was to think of something that we could prototype – something that felt both feasible for us and that piqued our interest. We had a workshop session where we tried to come up with different areas of interest by means of a word association game. It was quite fun, and we ended up with words like “snot”, “toilet seat” and “tattoo machine”. However, in the end what seemed to fit us as a first experiment was to hack one of the IKEA hydroponic growth systems from the VÄXER series. Because what’s more analogous with Sweden than IKEA?

The VÄXER is a simple hydroponic plant growing system that consists of a tray for plants and an LED light. This made sense, since we seemed to have somewhat of an unofficial chili growing competition going on at our desks in the studio. We decided we wanted to have some way of turning on and off the light, of rotating the watering the system and have it notify us when the water level was too low. To be able to control this, we wanted an app that could display the notifications to our devices. We also wanted to keep the original product as intact as possible.

For our hardware, we opted for an oxygen pump made for aquariums, which allowed us to rotate the water by producing bubbles. Of course the light came with the original product, so using a basic relay allowed us to cut the power to both the light and the air pump by connecting to their original power cables. For the water level, well, we simply used a water level sensor. All of this was then connected to an Arduino Uno with an ethernet shield, which allowed us to easily control the relay, read the water level sensor, and communicate with our cloud service of choice, which was Firebase. This allowed us to make a simple iOS app that would update live as the state of the hardware changed. What we ended up with was a little system that periodically turns on and off the water rotation and light, and continuously monitors the water level. This can also be toggled in the app if desired. When it’s time to water, a notification is sent to the user. 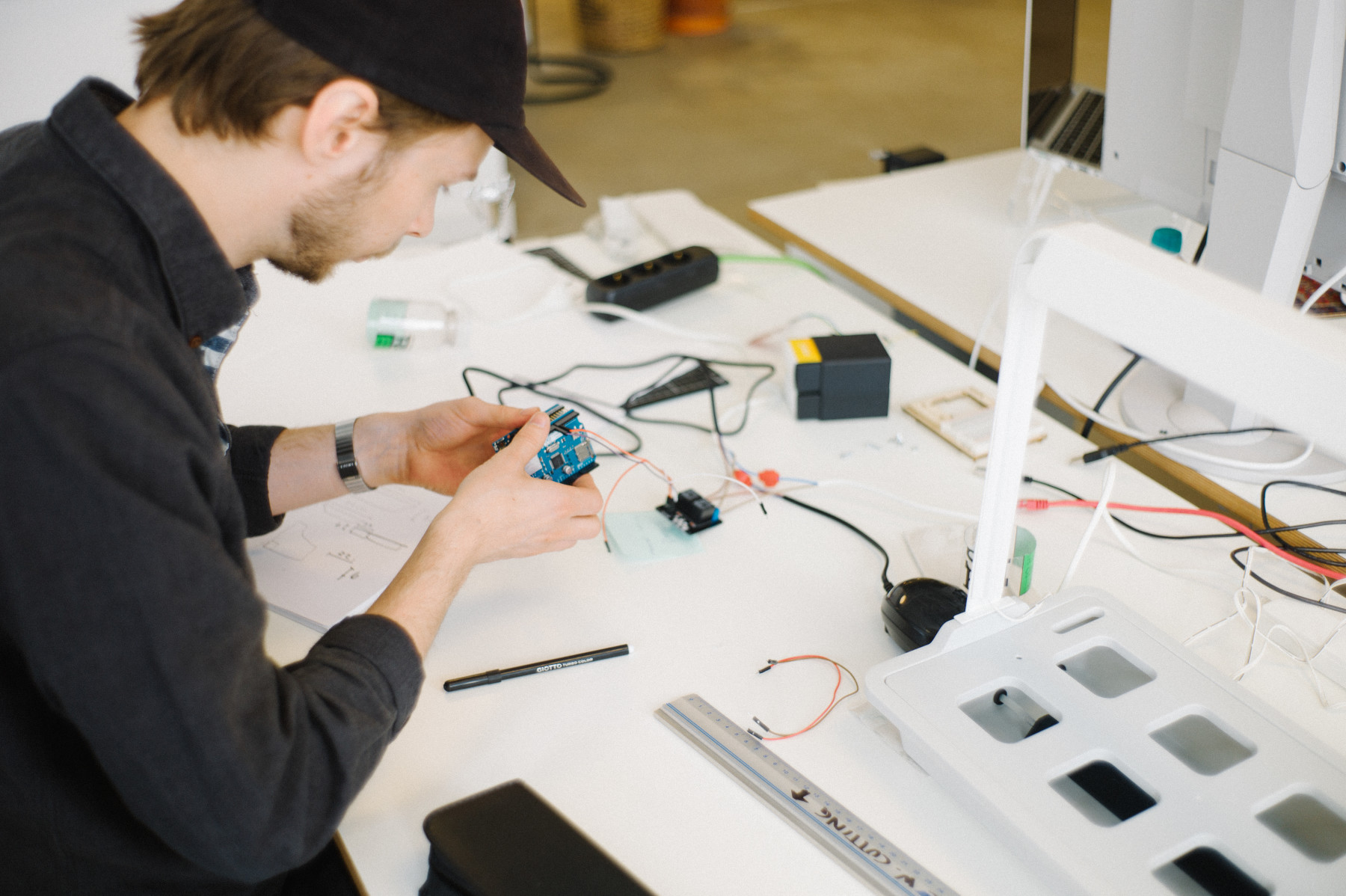 What’s Next For The IKEA VÄXER?

Some ideas that we would like to try in the future are things like adding a fan to circulate the air and aid with pollination, a light sensor that could potentially save electricity by turning off the light when the natural light is adequate, and also a little dedicated box that fits seamlessly with the VÄXER bowl. From a software perspective we would like to add different types of graphs based on the historical data in the system and so on.

It seems there are incredible opportunities to improve existing products, but also develop completely new products based on the functionality that’s afforded by widely available internet connections. At ustwo, we see great opportunities at the intersection of software and the physical world, so it’s only natural that we’re drawn to the increasing presence of connected physical consumer products. We’re not interested in crowding our space with connected devices that offer endless notifications about our lightbulbs and washing machines, but rather, we want to change things by seamlessly integrating internet functionality where it most logically should exist. Since the internet is so integrated into our lives, it only makes sense that it would extend to the objects that we use most. It feels, somehow, natural. When it comes to IoT, ustwo is interested, invested, but most importantly, has the general skill set to work on it, so we’re hoping to have the opportunity to do just that in the near future.

If you're interested in collaborating with ustwo on an IoT project, please drop us a line at hello@ustwo.com