One of the first experiences we tried after getting the HTC Vive VR Headset at ustwo Nordics was Eleven Table Tennis, a table tennis game which we’ve had a lot of fun exploring. What really stood out to us however, was the online mode where you'd get matched up with another person for a couple of games. Your opponent is randomly selected from across the globe and is only represented by a mask, a bat and a controller. 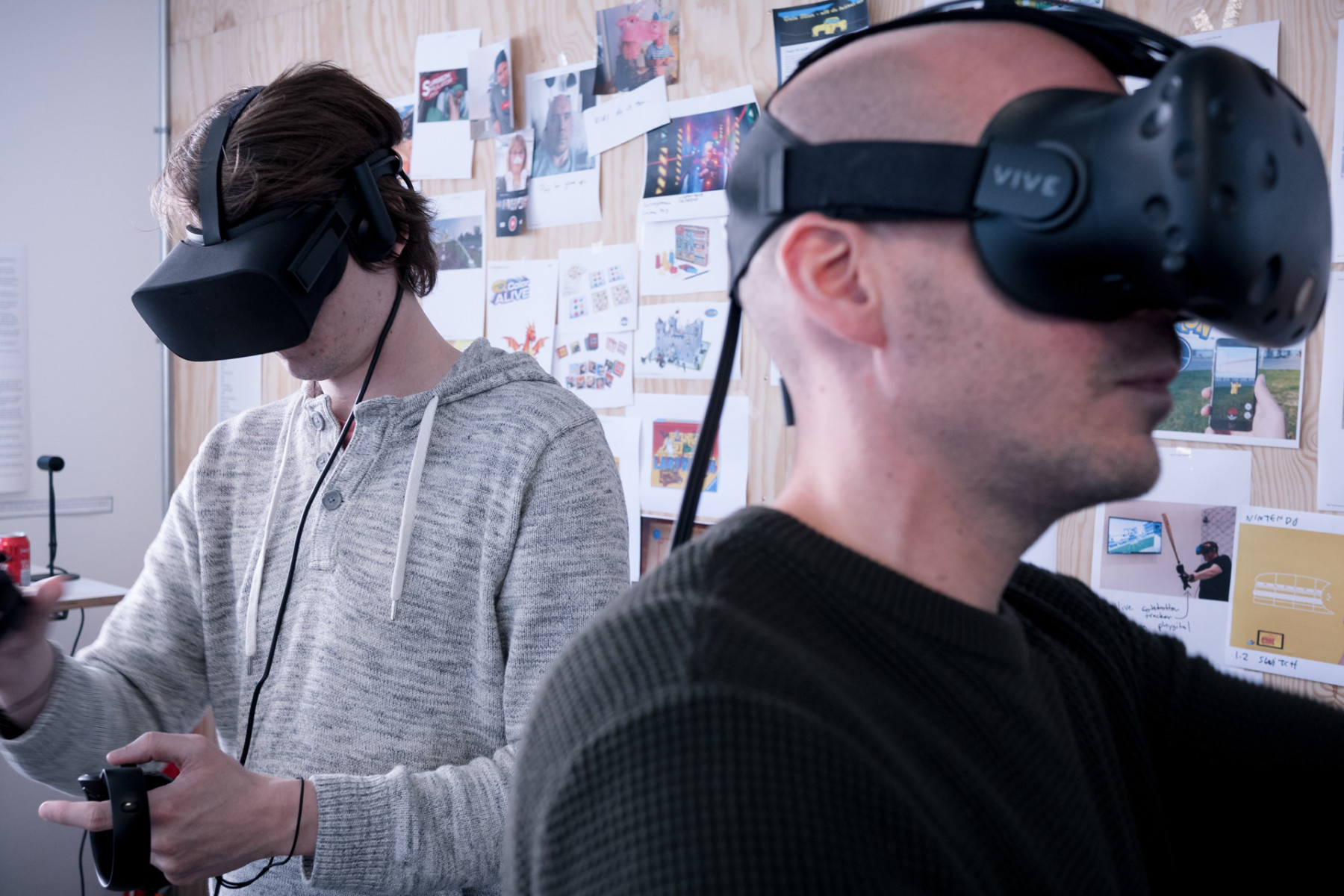 While dueling, we found ourselves communicating amazingly well using only these three visual cues. We were able to recognise players shaking their head or shrugging their shoulders after a bad hit and reaching for a handshake after a game. Trying the game with headphones on, we felt that hearing the voices of our opponents kept us from getting truly immersed in the game. We started thinking about the notion of nonverbal communication in VR. Would it be possible for two players to cooperate in VR without using their voice and with minimal visual cues? Would hands and a head be enough to get a message across and interact with another person in VR?

To try out this hypothesis, we decided to build something first hand. Our plan was to create a playful experience where players would need to solve some sort of puzzle or challenge together, using only body language to communicate. To start things off, we felt a game of charades was a natural choice as it’s something that people are familiar with and easy for players to understand.

With prior knowledge in setting up VR projects using Unity and tools like VRTK, we were able to get started fairly quick. In a couple of days we had a first rough prototype ready with an open space and two players opposite each other represented by only a head and two hands. This was a small-scale test in the studio, one of the players was given a set of written instructions and the other player got to shout out their guesses.

Testing the prototype on co-workers, we quickly noticed we had created something fun and engaging. We spent a couple of days polishing the experience, replacing our handwritten notes with a system where players would be presented with different emojis to portray to the other player. We also created a new set of hands for the player with the ability to make a fist. This made some finer interactions possible and players could now illustrate waving, or grabbing things. At this point, we felt convinced that communication was possible using only hands and a head and we started to change our focus a little bit.

During the prototyping phase, a lot of thoughts popped up around ‘collaborative creativity’ in VR. We wanted to see how the nonverbal communication from Charades would work in that kind of setting and decided to start working on a new prototype. We started off with the idea of a playful, creative tool that connects two strangers and lets them create a piece of art together, still using only body language to communicate.

Inspired by voxel editors like Qubicle and MagicaVoxel, we settled on letting the users draw lines made up by 3-dimensional pixels, voxels. Over the course of a few weeks, we focused on building and designing our prototype, while continuously performing user tests with friends and co-workers in the studio. Eventually, we ended up with: Deus Voxel, an experience where two players collaboratively create art by drawing glowing neon shapes together on a deep space platform.

During development, we performed a few experiments to see how we could affect the cooperation between players. One of the highlights was when we invited our studio in New York for a play session. Playing together with someone on the other side of the Atlantic got us a lot closer to the feeling of playing with a random person online.

Giving each of the players a specific color to draw with caused more of an interaction between players, as players would erase the other player’s lines to create objects in their own color. Or they could signal for the other player to fill something in with their color to make a more intriguing pattern. 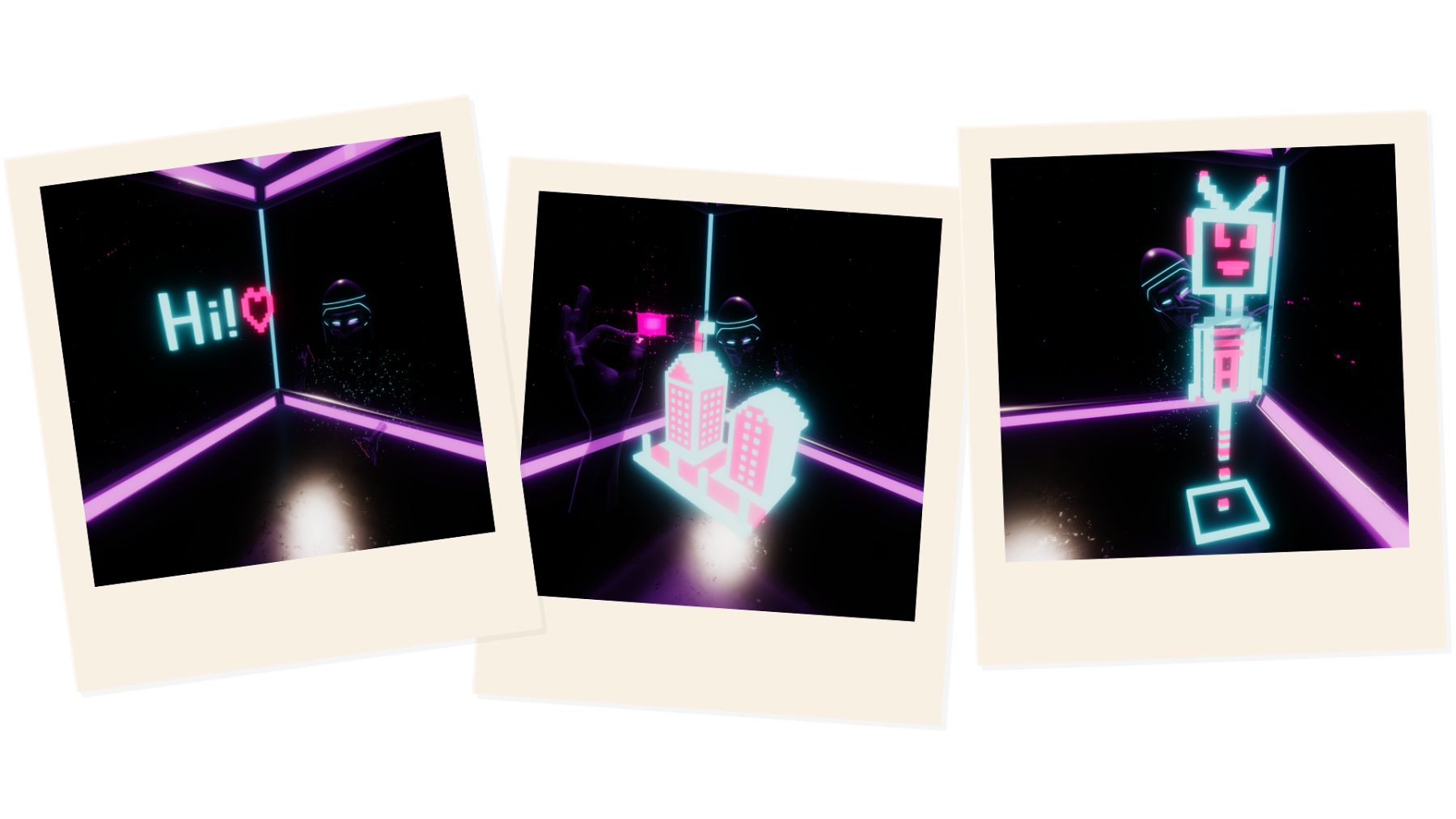 The first versions of the prototype only allowed players to draw next to existing lines, and every drawing had to start at one exact point in between the players. This forced players to focus on drawing collaboratively on the same piece of art. As we moved to a more free form of drawing where players could draw anywhere in the space around them, they would instead start off on their own drawing, but would often end up creating something together in the end.

Being able to share your experiences and cooperate with someone else in VR adds a whole other dimension you don’t get otherwise. Adding the fact that the players might not even share a common language is fascinating and shows how far we can communicate and collaborate with very small means.

We believe collaboration in VR will become increasingly important and with this experiment, we know it's possible to build strong immersive experiences where players actually create things together. We look forward to keeping exploring the opportunities and apply more knowledge in that direction.

ABOUT MIKAEL JOHANSSON AND LINUS NORDGREN

Both developers at ustwo Nordics, Mikael spends his days in the studio building apps, games and VR experiences and his nights in the garage welding together old bikes. Linus creates play experiences for mobile and VR.  He once set the world record for the fastest Unity certification.