Mobile photography is a huge social phenomenon. Online photo communities like Instagram, Eyeem or Flickr provide popular, easy-to-use platforms which allow people to express their creativity or simply share the highlights of their lives, pets, food… or feet.

But what about mobile videography? Although video sharing has been growing over the last couple of years, it still far from eclipsing the popularity of photo-filter apps.

You would think that with better mobile cameras, more powerful devices and faster connections people would be sharing video content with the same voracity as they've been sharing images but up until the release of Vine late last year, this hasn't been the case. Could 2013 finally be the year of mobile video, or is there another reason why mobile video hasn't taken off? 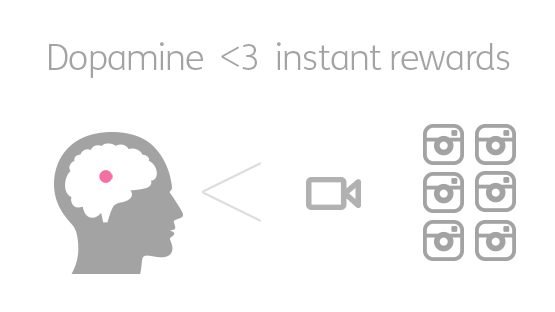 Perhaps dopamine is the reason why there’s such a huge difference in use between the disciplines.

“Dopamine plays a major role in the brain system, and is critical in all sorts of brain functions, including reward-driven learning…

…It's easy to get in a dopamine induced loop. Dopamine starts you seeking, then you get rewarded for the seeking which makes you seek more. It becomes harder and harder to stop looking at email, stop texting, or stop checking your cell phone to see if you have a message or a new text.” —Psychology Today

I would venture to say that the act of taking a picture, applying filters and publishing is much more rewarding than taking the time to create and share good video content. It takes much longer to create decent video content. Not only do you need to shoot the content, you need to edit it and editing takes time. The longer it takes to create the content, the longer the delay in receiving the "reward". This may be a delay not all users are willing to wait for, especially when you can spend much less effort on Instagram and get “Likes” instantly.

What option do you think our dopamine addicted minds would go for? Is this the reason why photosharing is more popular than videosharing? Perhaps, but I believe it's not the only one. 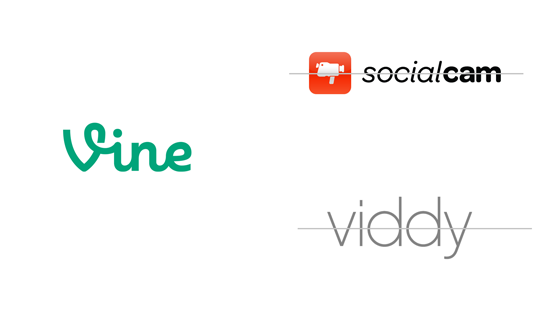 It didn't seem like there was an Instagram-like mobile video sharing app until Vine appeared. However, Vine did not invent the video-sharing wheel.

Socialcam & Viddy are well established networks which have been running for a few years already, allowing the user to do pretty much the same thing that Vine does—record and share short video clips. Although their total number of registered users is far from small, not many people know about them, whereas Vine is the next big thing. Why is that?

Is the buzz around Vine's launch just because belongs to Twitter, or is it because the app itself offers a unique proposition?

If you go to Viddy or Socialcam, the kind of video content uploaded by their users is not very different from YouTube's, whereas Vine has demonstrated that six seconds are perfect to capture your daily life, create a stop-motion video or a short-film, and even bring fans behind the scenes!

Combine this with an innovative capture method which negates the need to edit videos, serve the created content with minimal delay and users begin to reach that "reward" for sharing video content almost as quickly as they do on Instagram.

So whilst Vine isn't the first popularise videosharing, it manages to successfully remove barriers to people creating and sharing video content and perhaps this might just be enough to make 2013 the year of mobile video.

Caution on below video: language.